Earlier today I read a post by Michael Tomasky at The Daily Beast. I was really surprised at how Mr. Tomasky says liberals, conservatives and Republicans viewed President Bush and President Obama. Here is what he had to say:

"When my friends and I looked at George W. Bush in 1999, we shuddered like people who’d turned a street corner and stumbled across a dog’s corpse. We knew and had contempt for his beliefs, but it had nothing to do with them, really. It was just the way he presented himself. That puffed-out chest. That self-satisfied smirk. All that Jesus talk—even in the event that it was sincere, which we never quite bought, it was to a liberal deeply inappropriate to haul it into the public square like that. He represented Southern country clubs and Dodge Durangos and Browning bolt-actions and homes with no books in them (putting Laura to the side, since she wasn’t the candidate). He was the kind of man who, if I ran into him at a hospitality tent at a tailgate party, I’d make an effort to avoid. Liberals just couldn’t stand the sight of the guy. And that was before he ruined the country.

I understand that conservatives feel similarly about Obama. They look at him and see wine-and-cheese parties where people have jazz playing in the background and where talk turns to the merits and demerits of Jonathan Franzen, who drive Priuses (or is it Prii?) and buy espresso machines and live in homes with far too many books in them. And worse than that: for much of Red America, Dr. Frankenstein himself could not have stitched together a more perfect Other: urban, urbane, sophisticated, intellectual. “Black,” of course, may no longer be a deal breaker in this day and age, but it doesn’t help. Many conservatives clearly can’t stand the sight of him."

Wow huh? I can't speak for ANYONE else, but I'd like to say this is NOT how I ever viewed Barack Obama. My view of Obama was not good- still isn't good, but I never thought of "wine-and-cheese parties" with jazz playing or homes with too many books in them. No. My impression was more along the view of butchered babies, abortionists, inexperience, all mouth no action, spineless, backroom deals, Chicago politics, underhandedness and we can't forget the rantings of Obama's minister Reverend White who left a distinct impression on me of "Black America" hating every White American for the sins of American History. That was my view of Barack Obama when he was running for president. I can't say much of that has changed, perhaps it's only worsened.

My view of George W. Bush in 1999 was not "Southern Country clubs" or "Dodge Durangos" or "homes with no books in them". No, instead I thought we'd have a President who didn't cheat on his wife, have affairs in the Oval Office, lie under oath...to put it simply, I had hope that I would be able to respect him even if I didn't agree with all his policies. I am happy to say that I was right about my first impressions of President G.W. Bush.

Then Tomasky goes on to say that Rick Perry is "chillingly Bush-like", here is how Mr. Tomasky defines Perry as being "Bush-like"...

"Perry, on this scale, is chillingly Bush-like. I saw a clip the other day of him saluting—an off-screen soldier, perhaps, or a flag. It was a small thing. But he looked exactly like Bush. The chest pumped up with self-regard. The overly aggressive way he thrust his saluting hand out from his forehead. He even, I swear, was smirking. I shuddered all over again."


How does Mr. Tomasky know that Perry's "chest [was] pumped up with self-regard"? To me, he looked patriotic, with a chest swelled in pride of our great country. Interesting in how people can view the same thing and come to different conclusions and impressions. 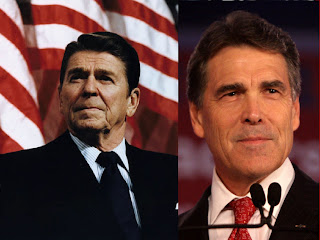 I don't see Bush in Rick Perry at all. While they both may have come from Texas and have similar political views it is Ronald Reagan that I am reminded of each time I see Rick Perry in the media. I am not sure exactly what it is about him, but he always brings President Ronald Reagan to my mind.