Man with biblical fingers and toes...

Found an interesting story on WFSB News channel about the man with 24 fingers and toes.

"It's thanks to my 24 digits that I'm able to make a living, because I have no fixed job," Hernandez said. 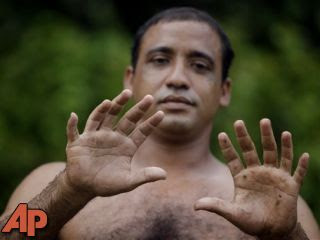 Known as polydactyly, Hernandez's condition is relatively common, but it's rare for the extra digits to be so perfect. Anyone who glanced quickly at his hands would be hard-pressed to notice anything different unless they paused and started counting.
Hernandez said that as a boy he was visited by a prominent Cuban orthopedist who is also one of Fidel Castro's doctors, and he declared that in all his years of travel he had never seen such a case of well-formed polydactyly.

"He was very impressed when he saw my fingers," said Hernandez, who is the only one in his family to be born with extra digits."

From the bible:
2 Samuel 21:20
"There was another battle, at Gath, and there was a giant, who had six fingers on each hand and six toes on each foot—twenty-four in all. He too was descended from the Rephaim."

Wonder if this man is a descendent?