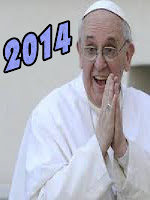 Watching all the media speculate on what the United States will look like in 2014 made me wonder what this nation would look like IF [big IF here] American Catholics were to live the new year inspired by what they HEARD and BELIEVE [rightly or wrongly] Pope Francis has said in 2013.

And yes, I am strongly considering that what MOST Catholics ‘heard’ Pope Francis say was actually what THE MEDIA interpreted Pope Francis said- though to be fair, a good amount came directly from Pope Francis’ mouth himself.

So let’s speculate what 2014 will look like IF Catholics did what they believe the Pope has taught this past year.

[links to all sources at bottom]

First up, no more Catholics at the March for Life on January 22, 2014 in Washington D.C. because the

Pope told the world in his Jesuit interview with America Magazine…

“We cannot insist only on issues related to abortion, gay marriage and the use of contraceptive methods. This is not possible. I have not spoken much about these things, and I was reprimanded for that. But when we speak about these issues, we have to talk about them in a context. The teaching of the church, for that matter, is clear and I am a son of the church, but it is not necessary to talk about these issues all the time.  The dogmatic and moral teachings of the church are not all equivalent. The church’s pastoral ministry cannot be obsessed with the transmission of a disjointed multitude of doctrines to be imposed insistently.”

What Catholics around the world heard from media sources was…

ABC News: “Pope Francis Calls for End to “Obsession” with Homosexuality and Abortion”

MSN News: “Pope: Church will Fail if mired in rules for gays and abortion”

These views [rightly or wrongly interpreted-depending on who you ask] of the Pope’s statements were further set in stone when the Pope gave his now infamous 2nd Interview – the one that was first on the Vatican website, then months later removed because of the uproar it caused among confused Catholics.  We later found out that the interview was written ‘by memory’ rather than actual notes.

At any rate the media ran with what was reported in the Interview (and remember this interview was on the Vatican website for a while which Catholics -and others-viewed as the Church’s stamp of approval on the writings) and people are still confused over what was 'right' and what was 'wrong' in the interview.  The average Catholic doesn't (in my experience) look up everything the media reports to see if its true or not, especially when the article in question is known to be on the Vatican website.  So it is believed as it was reported.

Now lets look at the ALREADY PROVEN results of how United States Catholics have understood the Pope’s words and responded on the topic of ‘gay marriage’…[its fairly safe to presume that this will continue if the Pope/Vatican don’t better clarify the Church’s teachings and Pope Francis’ words.]

But it doesn’t stop there with the issue of gay ‘marriage’, homosexuality and the Pope.  At the end of World Youth Day 2013, the Pope’s now famous words “Who am I to judge?” (when asked about homosexuality) have rippled across the globe and planted themselves into Catholic heads as a stamp of approval to no longer oppose any part of the gay agenda.

Catholic politicians have taken Pope Francis’ “Who am I to judge?” statement and used it to vote in favor of legalized same sex marriages in assorted states. [I wrote about this in Novemeber 2013]

During a homily in 2013 Pope Francis talked about Atheists…

"The Lord has redeemed all of us, all of us, with the Blood of Christ: all of us, not just Catholics. Everyone! ‘Father, the atheists?’ Even the atheists. Everyone! And this Blood makes us children of God of the first class! We are created children in the likeness of God and the Blood of Christ has redeemed us all! And we all have a duty to do good. And this commandment for everyone to do good, I think, is a beautiful path towards peace. If we, each doing our own part, if we do good to others, if we meet there, doing good, and we go slowly, gently, little by little, we will make that culture of encounter: we need that so much. We must meet one another doing good. ‘But I don’t believe, Father, I am an atheist!’ But do good: we will meet one another there.”


What people heard via the media (and many still believe)…

The Independent (UK): “Pope Francis Assures Atheists: You don’t have to believe in God to get to Heaven”

This again caused so much confusion the Vatican had to put out a statement clarifying the Pope’s homily.

But how many people remember the ‘clarification’ from the Vatican when most of the media didn’t talk about that, they simply ran the ‘no need for belief’ story and people (rightly or wrongly) believed it because the Pope said it?

The misunderstanding of uneducated Catholics could have a very big effect in 2014 based on the news headlines from 2013.

This sadly IS what many Catholics have taken away from 2013.  So what does that leave us?

What do we have instead?

Catholics with no voice.

An enormous deafening of the Catholic voice in the world for the first time in over two thousand years.

Catholics will merely feed the hungry and visit the elderly [as they already have been doing] and strive for better jobs for our youth, but we will no longer SPEAK the Faith to anyone because we’ve talked too much and become ‘obsessed’ with ending the slaughter of millions of pre-born human beings.  We’ve become ‘obsessed’ with warning people about the mortal sin of homosexual relationships and the need to repent from mortal sin before it’s too late and your soul is damned.  Who are we to judge if your sin damns you eternally?  We’re not our brother’s keeper- right?

In silence we will watch the further decay of the world should Catholics take what the media reported and what the Pope said and put it into NON-action.

The “new evangelization” is NOT silence – it can NEVER be silence.  Christ commissioned His Church to PREACH the Faith and to OBEY the Faith- who can obey it if we don’t tell anyone what the Church teaches?  What is sin?  What must be repented of?

We can’t do what Christ commissioned us to do if we are silent.

Don’t believe what the media reports and don’t be silent in 2014.  Let 2014 be the loudest Catholic year yet!

Happy New Year and may God bless you,