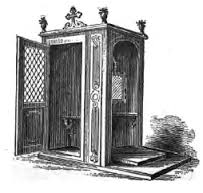 As I’ve mentioned before on my blog, my own parish is now yoked with another parish so many things have changed for us.  My parish no longer offers a Saturday Vigil Mass or Confession on Saturdays – the only time you can have confession at my parish is to set up an appointment during the week.

Well, I didn’t get around to setting up an appointment this week, so this afternoon I drove to another town where I have occasionally attended Mass and gone to Confession on Saturdays.  Today when I arrived at this parish at 3 pm (Mass is at 4 pm), the priest was in the confessional with someone, but no one else was waiting.  So I was next.

I prayed for a good while before the confessional opened up and out walked a friend of mine, we greeted each other briefly as he went on to sit in another pew.  The priest, (I’ll call “Father S”) walked out behind my friend, nodded at me waiting for confession and then walked passed me.

So I prayed a bit more and waited for “Father S” to return to the confessional.

When I looked around I found Father placing pink envelopes on pew seats.  I watched him for a moment, and then noted the clock reading 3:15 pm.  Since I’d been at this parish before, I know there is a rosary at 3:30pm led by a deacon so that confessions continue until 3:45 pm.  Still plenty of time for my confession I thought.

Thinking perhaps Father didn’t know I was sitting near the Confessional because I was waiting for Confession I said, “Father will you hear my confession?”

I said “Excuse me?” I was sure I had misunderstood him.

There were three other parishioners sitting in the pews who looked just as stunned as I felt.

Father (slapping down pink envelopes on pews) said “No, I cannot hear any more confessions today because SOMEBODY didn’t do their job so now I have to do it.”

I was stunned.  I didn’t respond for a moment as he continued making his way from pew to pew placing pink envelopes on the seats.

At this point, I see my friend who had just left the confessional go over to assist Father with his envelopes – my guess is my friend was offering his services so that Father could hear my Confession, but it didn’t work.  Father would not stop placing pink envelopes on pews, even with someone else offering to do it.

I tried again, “So you won’t hear my confession?”

Again, he said “No, I have to do someone else’s job because they didn’t do what they were supposed to do.  This is what happens when people don’t do their job.”

I nodded at him, not knowing what to say, knelt before the Tabernacle, crossed myself and made my way toward the door still not believing that a priest would refuse to hear someone’s confession.

On my way out, Father called after me, “I will hear your confession AFTER Mass.”

‘After Mass’? I wasn't there for Mass (I attend at my own parish on Sunday), I was there solely for Confession.

I walked out shocked that a priest would CHOOSE to place envelopes on pews rather than hear a person’s confession.  He was clearly angry at someone for not placing the pink envelopes in the pews, but to take that anger out on someone wanting and waiting for the Sacrament of Confession is just unbelievable to me.

It's hours later and I am still in disbelief with what happened.

Shouldn't a Sacrament be a priority over envelopes?

What sort of priest refuses a Sacrament to someone in order to place envelopes on pews?  He still had a half an hour of time to be hearing Confessions and he had 45 minutes before Mass was to begin. I can think of no excuse for his behavior.

Stunned, I got in my car, drove home and wrote a detailed letter to his Bishop telling exactly what happened.

I am not sure what the issue is with this particular diocese but if you recall me telling another nightmare Confessional story about this year’s Holy Week when another priest in another parish (same diocese) was texting while hearing confessions.

What is going on?

I did not write to the Bishop that time- I probably should have.  Many of my readers told me I should but I let it go.  Now that this has happened again… I am not letting it go.  The Bishop needs to do something about this so that it does not continue.

I hope I hear back from the Bishop (I gave him my name, email and phone number), and an apology from the priest would be nice too.