In August of 2013 (the summer Fr. Dan became a priest), I ran into Fr. Dan Fitzpatrick on Twitter who was actively promoting the often pornographic, rape filled violent show "Sons of Anarchy" on Twitter (he called it an "epic show"). 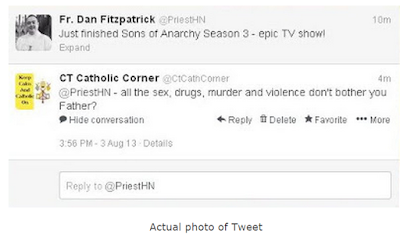 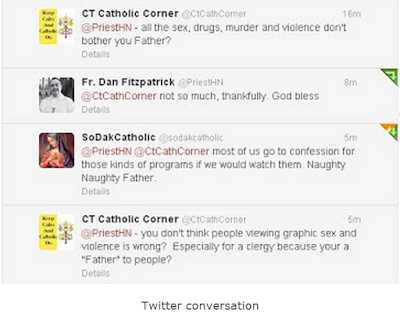 When I questioned Fr. Dan about his not only viewing such shows, but promoting it on Twitter he at first laughed it off.  I mentioned the graphic sex, sin and violence the show is wrapped around and Fr. Dan got silent with me.  Then when another Catholic questioned him about viewing such material he deleted his twitter account, created a new twitter account and blocked myself and the other Catholic who dared to question his promoting such offensive viewing material.

I kept track of Fr. Dan since then (had to create another Twitter account to do it) and found him to be as clueless as the summer he became a priest.  In my opinion he hasn't learned or grown in the true Faith at all since 2013.

Yet this unorthodox priest is quite popular in pubs and with his podcasts where he "teaches" the faith (God help those who listen to him!): 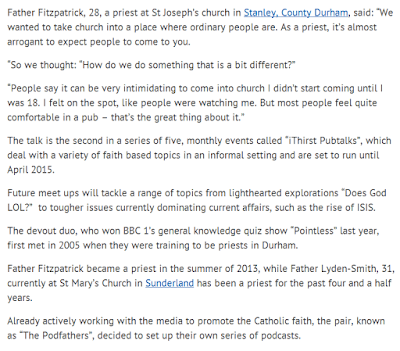 Now, Fr. Dan is back.  This time he is threatening to sue a Catholic blogger, Clare over at Faith in Our Families Blog (just like another priest we know) for attempting to correct him in another error.  Read Clare's story at Restore-DC Catholicism and at Faith in Our Families (who confronted Fr. Dan in his numerous errors like supporting gay marriage in Ireland on his Facebook page -below- and promoting the belief that the Holy Spirit is female on Twitter- thanks to another liberal priest). 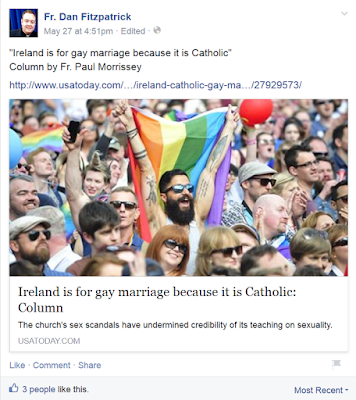 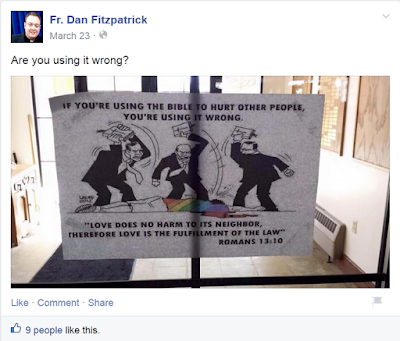 This priest simply will NOT tolerate ANYONE who dares to rebuke him or question him about anything!

Fr. Dan has got to be disciplined by the Church and PROPERLY taught the official teachings of the Church!  Catholics do NOT need this sort of intolerant bad example priest leading them into sin and heresy.  We don't need priests who teach their personal opinions- we can get that in any protestant community.  We need and must have priests who teach official Church doctrine- ALWAYS.

HOW did this guy become a priest in the first place??

Pray to God that Fr. Dan either changes his ways or is REMOVED from his position before he does any more damage. And pray for the souls of all the people who might be or have been, led astray by this and other wayward priests.


**If you are a Catholic blogger worried about being sued by a Catholic priest for questioning his actions or comments, please read this: http://rorate-caeli.blogspot.com/2015/03/exclusive-cardinal-burke-interview-with.html

Addition:
I found it interesting that Fr. Dan's sidekick, Fr. Marc first insults the Catholic blogger on Twitter saying "you're a hurtful abusive little woman that needs a hobby. You're no help to my church" and then speaks out of the other side of his mouth saying "You accomplish more by kind words and a courteous manner than by anger or sharp rebuke". 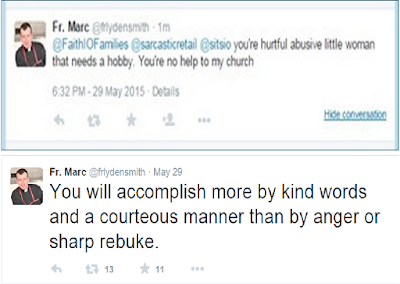 I am not being sued, they have misread this post.