Irondale, AL (EWTN) – Were you taught that the Inquisition was a series of events fueled by religious fanaticism and rife with cruelty and terror? If so, prepare to be surprised by the truth of what really happened. Get the facts when EWTN premieres “The Inquisition,” an original four-part docudrama co-produced by EWTN, Stefano Mazzeo, and Lux Communication. 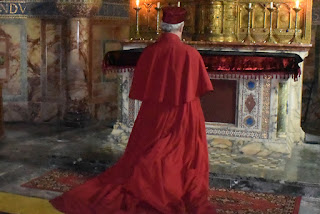 The mini-series airs 9:30 p.m. ET, Wednesday through Saturday, Oct. 26-29. The Wednesday airing will be preceded by a special “EWTN Live” interview at 8 a.m. ET with Producer, Writer, and Director Stefano Mazzeo, and Professor Thomas F. Madden, chair of the Department of History at St. Louis University, both of whom EWTN viewers will remember from their work on a previous blockbuster mini-series: “The Crusades.”

“The mini-series features live action drama sequences and interviews with leading historians and churchman to reveal the truth about one of the most misunderstood periods in Church history,” said EWTN President & COO Doug Keck, who served as Executive Producer of the series. “There were, in fact, multiple “inquisitions” in different countries over the centuries, including the widely misunderstand Spanish Inquisition.”

Filmed on location in six European countries and beautifully scored by Chorus Salvatoris, the mini-series takes on myths and heresies that are prevalent even today – as well as the real reason Galileo got into trouble!

For example, did you know that many misrepresentations about the Spanish Inquisition were developed over four centuries ago by Protestant Northern Europe as part of a propaganda campaign against the Catholic Church? Producer Mazzeo says that Spain was the Catholic superpower of the age and the Protestant countries needed a stick with which to attack Spain and the Catholic Church in order to cement the Reformation and secure the loyalty of their converts. In other words, they needed to give people a reason not to want to be Catholic! Of course, that’s not the only reason. There was also the fact that England and Spain were locked in a battle over land in the New World, and more.

What most people don’t know is that “[t]he Spanish Inquisition was set up to deal with Jews and Muslims who were converting to gain social standing and power, not [because they believed in the faith],” Mazzeo said.

The problem is that these fake Catholics were introducing heresies and immorality into the Church. “The main reason for the Inquisition was [to help insure] that everyone would go to heaven,” Mazzeo continued, which is one reason only those who had been baptized were tried. “They did not want people to lose their souls. [Many will be surprised to learn that] while heresy was a crime punishable by death by the state, “the clerics of the Inquisition were forbidden to engage in torture or even to pronounce the death penalty!”

In fact, secular “justice” in the 16th Century was so cruel that, in England, many Catholics were being tried and executed for simply being Catholics. By contrast, in countries that had an Inquisition in place, many prisoners in secular prisons blasphemed in order to be transferred and tried by Inquisitors because they were much more lenient.

Yet myths about Spanish torture and cruelty – which the Spanish called “the black legend” – abound. So how did the black legend get started? Those expelled from the country for infiltrating the Church with their heresies began to use the printing press to write lies about the Spanish. Today, Mazzeo said, new "black legends" are being created by the modern secular media and some are still aimed at the Catholic Church.

“The way Pope Pius XII is treated is a black legend,” Mazzeo said. “The Crusades was a black legend of the Enlightenment period. Today, militant secularists create black legends that the Church is anti-women. For example, the witch craze hysteria that swept Protestant Northern Europe in the Early Modern Era saw thousands of women being executed on hearsay of or the testament of a jealous neighbor. In Catholic countries, where the Inquisition was in place, if someone was accused of things like sleeping with the Devil or flying, the Inquisitors became very skeptical; they were university-trained canon lawyers and theologians!"

When EWTN asked Mazzeo to create a mini-series about the Inquisition for EWTN, he said, “I wanted to look into why this has such a bad reputation. Why can’t people see it for what it really is? What surprised me was how in favor of the Inquisition I became.”

Please take note of this series and share it with your friends. It’s television worth seeing!