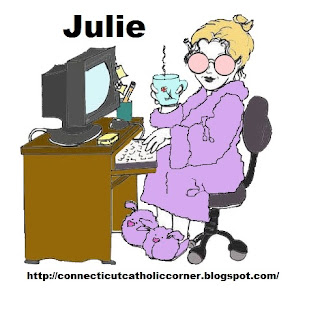 This post is about some things that caught my eye this week. The good, the bad, the ugly and the ironic.

Before I get to that, I've come to the conclusion that the Holy Father has an extremely narrow view of the world. All his constant talk of helping the poor (a given for any decent human being) and pushing for a larger role of women in the Church (deaconesses etc) and of course more "dialogue" is because Pope Francis, for all his globalist talk doesn't actually look at the global Catholic Church. I think he sees only the environment he was in and applies that to the entire world.

What the Church and status of people are/look like in Argentina is not what the Church looks like in the United States, the United Kingdom or any where else. This article by Rome Reports reflects my thoughts on the influence Argentina has on Pope Francis and the Bishops of Argentina. 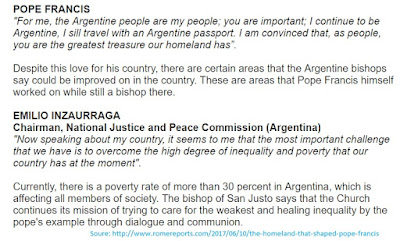 On Friday, Pope Francis (again) talked of expanding the role of women in the Church...


quote Catholic Online: If women are able to freely put their gifts at the service of the entire community, "the way in which society understands and is organized is positively transformed, reflecting better the substantial unity of the human family," he said.
Because of this, a beneficial model for society is one that amplifies the presence of women in social, economic and political life at the local, national and international levels, "as well as in the ecclesial," he said.
"Women have the right to be actively involved in all areas, and their right must be asserted and protected even by legal means wherever they prove necessary."
This, Francis said, involves "expanding the spaces of a more incisive feminine presence."

quote: However, "women can also become fully involved in exchanges at the religious level, as well as those at the theological level," the Pope said, noting that many women "are well prepared to face encounters of interreligious dialogue at the highest levels and not just from the Catholic side.""This means that the contribution of women is not limited to 'feminine' arguments or to encounters of only women," he said, adding that dialogue "is a path that man and woman must accomplish together."

...has he seen the Church in the United States? Women run nearly everything! I'd like to hear the pope speak to the problems in the United States...abortion, euthanasia, birth control, fornication- specifically the number of Catholics who live together before marriage, immodest clothing- when was the last time anyone ever heard about dressing modestly so you don't cause someone else to lust? There are dozens upon dozens of topics that Catholics in the United States (and other countries) need to hear our pope discuss, but all we get is more social agenda speeches about women's roles and the environment. It's disheartening.

Now for the Good, the Bad, the Ugly and the Ironic stuff...

This story is from last month but I apparently missed it. A friend sent it to me this week. The fantastic story of Father Maniyangat, who died and was taken by his guardian angel to Hell, then Purgatory and finally to Heaven where Jesus spoke to him telling him “I want you to go back to the world. In your second life, you will be an instrument of peace and healing to My people. You will walk in a foreign land and you will speak in a foreign tongue. Everything is possible for you with My grace.." !


Quote: "First the angel escorted me to hell. It was an awful sight! I saw Satan and the devils, an unquenchable fire of about 2,000 degrees Fahrenheit, worms crawling, people screaming and fighting, others being tortured by demons. The angel told me that all these sufferings were due to unrepented mortal sins. Then, I understood that there are seven degrees of suffering or levels according to the number and kinds of mortal sins committed in their earthly lives. The souls looked very ugly, cruel and horrific. It was a fearful experience. I saw people whom I knew, but I am not allowed to reveal their identities. The sins that convicted them were mainly abortion, homosexuality, euthanasia, hatefulness, unforgiveness and sacrilege. The angel told me that if they had repented, they would have avoided hell and gone instead to purgatory. I also understood that some people who repent from these sins might be purified on earth through their sufferings. This way they can avoid purgatory and go straight to heaven. I was surprised when I saw in hell even priests and Bishops, some of whom I never expected to see. Many of them were there because they had misled the people with false teaching and bad example."


Source: Priest Testifies to His Experience of Heaven, Hell and Purgatory After Death and His Return to His Body

I highly recommend reading this story if you haven't already! Good stuff!

Whenever we see Catholic clergy leading people into mortal sin it is bad, there is nothing, zero, nada good to be found in this story for Catholics in the United States.


Quote: "CHICAGO, June 9, 2017 (LifeSiteNews) — American Cardinal Blase Cupich has written a glowing introduction to the English translation of a high-ranking Vatican prelate’s new book that calls for Holy Communion to be given to civilly-divorced-and-remarried Catholics living in adultery as well as to cohabiting Catholics."


"Coccopalmerio, president of the Pontifical Council for the Interpretation of Legal Texts, argues in his book that Amoris Laetitia “could allow access to Penance and the Eucharist for the faithful who find themselves in an irregular union.” He explains “irregular union” applies to “all those who are married only civilly or living with a de facto union or tied to a previous canonical marriage.”
He argues that Amoris Laetitia allows for Catholic couples regularly committing acts of adultery to only have a “desire to change and the inability to do so” in order to receive Holy Communion."

The seeds of Pope Francis' Amoris Laetitia are being reaped and the crop is deadly weeds spawned from Hell.

While that is bad, there is hope coming from the Bishops in Poland (God bless them!)

This is ugly and evil. Yesterday in New York City a large group of people decided to protest something (I really don't understand what exactly) by getting completely naked covering themselves only in body paint and walking down the streets of New York in front of families, children and tourists who had no idea what they were in for.

It was disgusting. As Wayne Dupree puts it..."These Americans decided to walk down the streets of New York City with nothing but just body paint in protest of freedom I guess. Most will call it repulsive and childish. I call it a spirit of evil."

I agree with Mr. Dupree.

*warning: don't click the video of the "protest" its full of nudity

Pope Francis is speaking out about "the people being scandalized" by priests and he's putting his foot down! The irony is he's not worried about the scandalized folks still reeling from the things he's said ('who am I to judge?', 'don't breed like rabbits' etc) or by liberal priests leading people toward Hell with heretical teachings. Nope. Rather the pope is putting his foot down (rightly so) to prevent people from being scandalized because priests in Nigeria are protesting the pope's pick for Bishop. 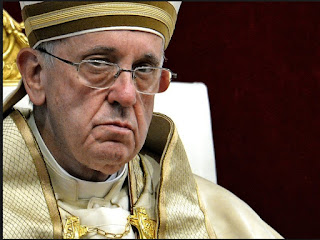 Imagine for a moment, that the following statement by Pope Francis were about the people scandalized by priests supporting the LBGTQxyz agenda, or "Catholic" politicians supporting abortion, birth control, euthanasia etc., or priests giving Holy Communion to people in mortal sin, or Catholic clergy and parishes marching in gay pride parades! All we can do is imagine, because our Holy Father is silent on these scandalous situations and the damage it is doing to the laity.


Quote: According to the pope's remarks posted by Kaigama, Francis said, "I think that, in this case, we are not dealing with tribalism, but with an attempted taking of the vineyard of the Lord." The pope also referred to "the parable of the murderous tenants" in Matthew 21:33-44.
"Whoever was opposed to Bishop Okpaleke taking possession of the diocese wants to destroy the church. This is forbidden," the pope said.
Francis said he even had considered "suppressing the diocese, but then I thought that the church is a mother and cannot abandon her many children."
Instead, he said, every priest of the diocese, whether residing in Nigeria or abroad, is to write a letter to him asking for forgiveness because "we all must share this common sorrow."
Each priest's letter, he said, "must clearly manifest total obedience to the pope" and indicate a willingness "to accept the bishop whom the pope sends and has appointed."
"The letter must be sent within 30 days, from today to July 9th, 2017. Whoever does not do this will be ipso facto suspended 'a divinis' and will lose his current office," the pope said, according to the posts.
"This seems very hard, but why must the pope do this?" Francis asked. "Because the people of God are scandalized. Jesus reminds us that whoever causes scandal must suffer the consequences."

If only our Holy Father would put his foot down over the things that actually scandalize Catholic laity on a daily basis around the world! We'd have a whole new Church! Guess the people who are scandalized by these things just don't bother the Pope much.