Gay Pride at the Vatican 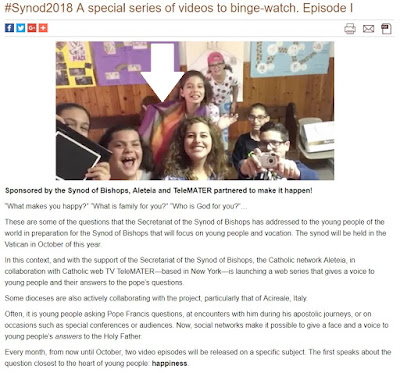 Seriously, what the hell is going on?

We all know that the rainbow pride flag symbolizes gay pride social movements- the push for gay marriage and other assorted "rights" like gay adoption. The authentic Catholic Faith has since the beginning taught against this abomination and now, we see this symbol of "gay pride" on the Vatican website? I ask again, what the hell is going on? Who is behind this? Who approved it? We need answers! 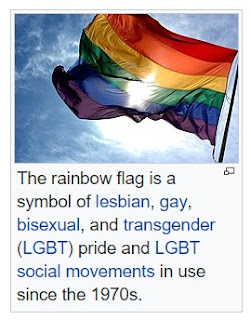 The Catholic Church used to clearly teach against these things.

The Bible is quite clear...

The catechism is quite clear...
2357 Homosexuality refers to relations between men or between women who experience an exclusive or predominant sexual attraction toward persons of the same sex. It has taken a great variety of forms through the centuries and in different cultures. Its psychological genesis remains largely unexplained. Basing itself on Sacred Scripture, which presents homosexual acts as acts of grave depravity, 141 tradition has always declared that "homosexual acts are intrinsically disordered." 142 They are contrary to the natural law. They close the sexual act to the gift of life. They do not proceed from a genuine affective and sexual complementarity. Under no circumstances can they be approved.

2359 Homosexual persons are called to chastity. By the virtues of self-mastery that teach them inner freedom, at times by the support of disinterested friendship, by prayer and sacramental grace, they can and should gradually and resolutely approach Christian perfection.

Our Saints are quite clear...

And Popes before our current Pope Francis have been very clear on the Catholic Church's teaching about homosexuality and "families". [more on that below with Saint John Paul II quote]

Yet here we have Pope Francis, who seems to be playing games with the laity-again.

Only this week he rightly stated the authentic Catholic faith when he said, “It is painful to say this today: People speak of varied families, of various kinds of family,” but “the family [as] man and woman in the image of God is the only one.”

Yet at the same time, we've got the pride flag on the Vatican website and while the Vatican is preparing for The World Meeting of Families in Ireland this summer they have invited Fr. James Martin (pro-homosexual unions) to be a speaker for "LBGTQI families"-(whom Pope Francis has promoted and shoved on the laity before). Why the conflicting messages from the Vatican and Pope Francis? 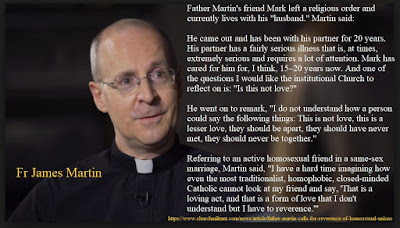 Why the confusion? Why the constant chaos and conflict between words and actions from this pope and this Vatican?  What message is the Vatican website sending by displaying a supposed Catholic youth draped in a gay pride flag? What are you telling the faithful? 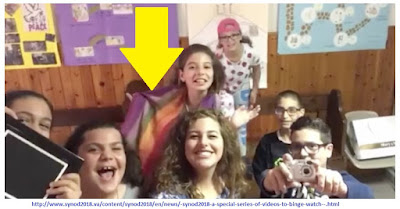 Even Ireland's Archbishop is showing his spinelessness to hold to the authentic Faith which I have already written about: HERE.

What part of... "The Church teaches that respect for homosexual persons cannot lead in any way to approval of homosexual behaviour or to legal recognition of homosexual unions. The common good requires that laws recognize, promote and protect marriage as the basis of the family, the primary unit of society. Legal recognition of homosexual unions or placing them on the same level as marriage would mean not only the approval of deviant behaviour, with the consequence of making it a model in present-day society, but would also obscure basic values which belong to the common inheritance of humanity. The Church cannot fail to defend these values, for the good of men and women and for the good of society itself." [source: Congregation for the Doctrine of the Faith: Considerations regarding proposals to give legal recognition to unions between homosexual persons. 2003]
...is unclear?

Christ's Holy Catholic Church should NOT be sending mixed signals. What the world needs are shepherds who are willing to share the authentic faith clearly. Shepherds who lead people out of sin and toward eternal life with Christ in Heaven.

Right now, we've got far too many shepherds leading their flocks in circles and across bridges toward hell. They appear to care not at all about saving souls, but rather to be popular and loved by the hordes of people drowning in mortal sin.

Where are all our good shepherds?

We need you to speak loudly and clearly so we can hear your faithful voices above the hissing and shouts of the delighted demons in clerics collars. Don't abandon the sheep! We are being led to eternal slaughter.

**UPDATE: Here are the good shepherds! Praise God for these men!
In Christ and weeping,