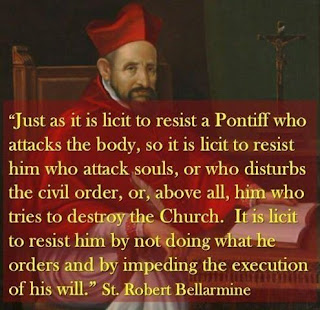 Catholic media is full of chatter after Vigano's testimony this weekend and the call for Pope Francis to resign.

Part of that chatter is focused on Church Militant's Michael Voris for his sudden change of heart about criticizing a sitting pope.

Full disclosure, I support Church Militant and believe they do a good job in defending and teaching the Faith - particularly when our clergy fail us. I also admire their bulldog attitude in going after corrupt clergy and not letting them get away with it. I think they are doing a very good job and I applaud them daily for their dedicated work.

That said, I have on my blog disagreed with Church Militant on a few issues over the years.

One of those times is when I voiced a different opinion on whether or not it is right to publicly criticize a sitting pope.

March 14, 2014:  Is it ever right to criticize a Pope?
In this post, I look at The Remnant's writer Chris Ferrara, the late (God rest his soul) John Vennari of Catholic Family News, Louie Verrecchio of (at the time) Harvesting the Fruits of Vatican II, and myself after Church Militant put out their "manifesto" stating they would not publicly criticize a sitting pope.

Quote: “Faithful Catholics need help in persevering through their anxieties and doubts, not continual reinforcement and encouragement of those troubling states. Less faithful Catholics form their judgments of "traditional Catholics" through the lens of perceived dissatisfaction and unhappiness with the Church and the Holy Father. Those who relentlessly criticize the Church, Her leaders, and especially the Holy Father, do immense harm to the Church Herself and discourage both potential converts and those struggling to stay faithful through the crisis that is all around us. The sad reputation of "traditional Catholics" as angry dissidents from virtually everything in the Church today is as well deserved as the reputations of those rightly described as modernists. A line must be drawn when it comes to criticism of the Holy Father, even when he says or does things that would invite appropriate criticism when said or done by those of lower ecclesiastical rank. Errant priests and bishops can be replaced. The Pope cannot. It may make us cringe at times but it always was and always will be true that ubi Petrus, ibi ecclesia. There have been extraordinarily awful Popes in the past but, for all that, the Church not only survived but thrived. The Popes immediately before, during and after the Protestant Revolt showed little recognition or understanding of the catastrophe unfolding before them (not unlike the post-conciliar Popes of our own time) yet, from such unpromising soil emerged an astonishing number of great Saints, and the Council of Trent.”

[note: the above quote taken from CM's website has since been either moved or taken down. The original link I have (as given in my blog post= http://www.churchmilitant.tv/faq/papalcriticism.php ) no longer works.]

Soon after writing the above post, I received a flood of emails, some from Church Militant on the subject. I wrote about our email exchange on...

In this post, after reading email discussions between Voris and others, I talk about the people who -seemed to me- to want to bully Voris into going against his conscience and criticize Pope Francis. While I disagree with Voris on a persons right to criticize a sitting pope, I defend Voris' right to set his own terms and limits to what he will publicly say about a sitting pope. My point was/is no one should be forced into saying or doing something their conscience tells them not to do.

In this post, I talk about a Vortex episode in which Michael Voris tells Catholics to "take a chill pill", ignore what the media reports about Francis and wait for the Vatican to tell us what the Pope really means when he says outrageous scandalous stuff.

I couldn't disagree more with Voris on this and state my reasons in the above blog post.

Now zoom ahead a year later and Michael Voris is himself calling for Pope Francis to resign. This of course, gave many Church Militant followers whiplash after all these years of being told to "take a chill pill" and "don't criticize a sitting pope" or you risk harming the Church and other people!

Quote: "Given the horror that has increasingly seized hold of the Church these past 50 years — and which has climbed to unimaginable heights under the pontificate of Pope Francis — now is the appropriate moment for the laity to offer comment, which we are rightly allowed to do according to canon law.
As many people know, Church Militant has taken great pains in the past to avoid public criticism of Pope Francis with regard to various confusing theological writings, interviews and off-the-cuff remarks.
Out of respect for the office of Pope, and so as not to induce scandal, we have dutifully left the work of publicly analyzing his theological content to those above us, more qualified to address those things specifically and those responses we have covered in great detail.
Likewise, we have made a point of steering far clear of any disrespectful or uncharitable comments denigrating the Holy Father owing to his theological pronouncements — but that was in the arena of theology.
The homosexual clerical sex abuse scandal and resulting cover-up is not theological at its foundation, but moral.
And in this arena, the laity are absolutely duty-bound to speak up, for while we may not all be theologians, each one of us is a moral being and will be judged by Our Blessed Lord on how faithfully we have lived in accord with that objective morality.
With that said, Pope Francis, Holy Father, for the salvation of your own soul, you must step down from the Chair of Peter and do so immediately."[clipped]

Now Church Militant has decided it is the right time to criticize a sitting pope...this is not going over well with those Voris has condemned in the past.

The Remnant is calling Voris out on his sudden change of opinion... "Now, after keeping silent on Francis’ continual violations Church teaching for five years, Voris suddenly rips the man he would previously piously refer to as “The Vicar of Christ on earth,” “The Supreme Roman Pontiff,” and “Sweet Christ on Earth” to absolute shreds."
I highly recommend reading Chris Jackson's The Remnant article in full:
Now That It's Safe and Five Years Late, Michael Voris Okays Criticism of Francis

The Remnant isn't the only one calling out Mr. Voris.

Hilary White has a few things to say also in her blog post "Wish you were here: Mike Voris, just man up and apologise"

Quote: "I just wrote this ridiculously long thread on Twitter. I’ll only add that though I’m glad Mike has finally got on board, (video here) the way he did it was, to be perfectly frank and given all the crap he’s given a lot of people over the years, churlish and ungracious. Dude, don’t be that guy.
Taylor Marshall and Dom Betinelli have done the more manly thing recently – admitted they were mistaken and wrong to have attacked people who should have been their friends and apologised. Be like them.
I still like Mike, and still want to maintain good professional relations with him. And I look forward to more beer and songs at some point in the future when all is at least a bit better in the world. In professional terms, we go way back and I welcome him to the Super-Sekrit Club, and appreciate his incredible furious flying helicopter of fists now that the crunch seems to be here at last."[clipped]

I know this sounds lame, but as a Catholic woman just looking for good sound Catholic news, information and teachings on the Internet- I really, really, really wish everyone could just get along.

What The Remnant, Church Militant, Catholic Family News and other Catholic media outlets and blogs have to offer is wonderful, inspiring, encouraging, uplifting and is often the glue that keeps so many of us sane in the chaos and mess of the Pope Francis Pontificate. We need your voices in the world today. Please try to sort out your differences and where apologies are needed, give them.

**My previous posts on Pope Francis and Michael Voris...