The Pope - The Chair of Peter the Apostle 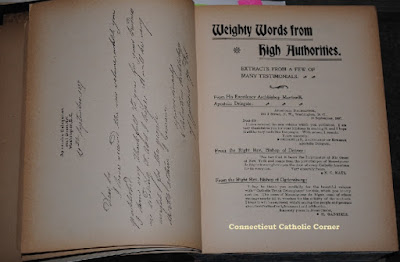 The following is from "The Pope" [pages 73-76]– Source: “The Fountain of Catholic Knowledge: A Comprehensive Statement of All the Truths of Holy Religion” copyright by Office of Catholic Publications, 1900.

As I stated yesterday, one of the things I am doing for Lent is re-reading from my collection of 100+ year old Catholic books and my plan to share these writings on my blog. Today being "The Chair of St. Peter the Apostle" I thought this was appropriate.

I really love this writing, and in particular the part about Peter answering Our Lord three times that he loves Him (this is one of my favorite Bible verses). So reading this and reflecting on it in light of our current situation with Pope Francis, a few things really stood out to me, I have underlined them in the text below.

I'd really like to hear what your thoughts are on this book passage about the pope and our current situation. 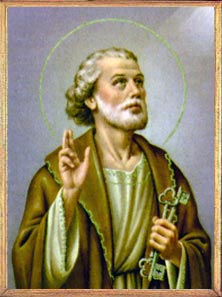 "The first Pope, the first Vicar of Jesus Christ, was the Apostle St. Peter.

Who cannot recall the memorable passages of the Gospel in which Jesus Christ first promised and afterward conferred upon him the sovereignty of the universe? Our Lord was in Judea, in the country bordering upon the town of Cesarea. To try the faith of His disciples, He asked what men thought concerning Him. They answered, “Some believe that Thou art John the Baptist, other Elias, and other Jeremias, or one of the prophets risen from the dead.” Jesus said to them, “But whom do you say that I am?” And immediately St. Peter, falling on his knees, exclaimed, “Thou art Christ, the Son of the living God.” Then it was that the Saviour allowed too fall from His lips the words which have travelled down the centuries with such marvellous fertility, and which still shine resplendently at Rome, graven in gigantic characters above the tomb of the Apostle-“Blessed art thou, Simon Bar-Jona, because flesh and blood hath not revealed it to thee, but My Father who is in heaven. And I say to thee, That thou art Peter; and upon this rock I will build My Church, and the gates of hell shall not prevail against it. And I will give to thee the keys of the kingdom of heaven. And whatsoever thou shalt bind upon earth, it shall be bound also in heaven; and whatsoever thou shalt loose on earth, it shall be loosed also in heaven.”

You have doubtless often heard this passage of the Gospel read, but have you ever fully fathomed the depth and the strength of its meaning?

First of all, we see that it was God Himself who had inspired St. Peter, and had made known to him the truth of the faith.

“Flesh and blood hath not revealed it to thee, but My Father who is in heaven.” St. Peter was already the elect of God the Father, and for this reason he became the elect of God the Son. “And I”- the Son of God made man, the Christ, the Messiah, to whom thou hast just rendered witness-“I say to thee.” Jesus Christ to St. Pete! the Master to His disciple! God to His Pontiff! the Head of the Church, who has reigned in heaven since His ascension, to him whom He had chosen to be, in His name, and by His authority, the visible head of the Church upon earth. I say to thee, “That thou art Peter.” I change they natural name of Simon into a new and symbolic name. “Upon this rock,” this living rock, as upon an immovable foundation. “I will build My Church,” and the very strength and firmness of the foundation shall give to it so perfect a stability, and so mighty a power, that “the gates of hell shall not prevail against it.” Thou shalt teach the truth to My Church, and for this reason it shall be infallible in faith: thou shalt guide it in the path which leads to a glorious eternity, and for this reason it shall be holy. I intrust My Church to thee; I have but one true Church, as a husband has but one lawful wife. And by what clear and evident sigh shall men recognize this one true Church, among the innumerable religious societies which lay claim to her glorious title? By one certain and distinctive mark; if she rest on and centre of unity-her father, pastor, doctor, and pontiff. “Upon this rock I will build My Church.” My kingdom shall be that in which thou shalt reign. My law shall be that which thou shalt teach. Whoever shall be with thee, shall be, for that reason alone, with Me, and whoever shall separate himself from thee, shall separate himself from Me, and from life eternal.

The powers of hell shall not be able to prevail against the Church, since they shall be powerless against thee. Persecutions shall come, heresies, and revolutions. Fear not, I am with thee, and upon thee ever rests My Church, which shall endure unto the end of the world. Those who desire to break thee shall be broken against thee, since thou art the corner of attraction to the whole moral world.

And the power that I will give thee shall be proportioned to the glory conferred upon thee, and to the vast requirements of thy ministry: “Whatsoever thou shalt bind or loose upon earth, shall be found or loosed in heaven;” and thus thy voice shall be as the voice of heaven, and thy infallible dictums shall precede the dictums of the eternal truth. That which though shalt bless, I will bless; that which thou shalt curse, I will curse… Blessed is the man who is obedient to the voice of Peter!

Such is the true meaning of those scriptural words which have ever confounded, and shall eternally confound, the irrational rebellion of Protestants against the Catholic Apostolic Roman Church, which is governed by the Pope, the legitimate successor of St. Peter.

Before ascending into heaven the Son of God solemnly confirmed His promise, of which some might have imagined that St. Peter by his sin had forfeited the fulfillment. “Simon, lovest thou Me?” Jesus asked three times of his Apostle. “Yea, Lord,” St. Peter three times answered; “yea, Thou knowest that I love Thee!” thus effacing by a triple protestation of love and devotion the triple denial of which he had been guilty. Then said Our Lord to him, “Feed My lambs-feed My sheep!” The lambs of Jesus Christ are Christians who are obedient to the voice of this good Shepherd; His sheep are the bishops and priests by whose God-given power and spiritual fatherhood all Christians must be born again-born to the life eternal, by means of baptism, the sacraments, and the teaching of the one true faith.

And thus St. Peter was solemnly appointed pastor of the universal Church by Jesus Christ before His ascension into heaven.

The Pope, Bishop of the city of Rome, of which St. Peter was the first bishop, is the successor of this great and holy Apostle.

The man in the Pope should be, and generally is, by the providence of God, worthy of esteem, by reason of his virtues; but even were he an utterly bad man, the divine majesty of his authority would remain uninjured; just as a father, who has a claim upon the honor and obedience of his children because he is their father, although they may know that, as a man, he has been guilty of many blamable actions. There are two persons in the Pope: the Pope and the man-as a man, he is more or less estimable, according to the virtues that he possesses; as a Pope, he is always worthy of all our reverence, and has a right to our entire and unquestioning obedience. It is not the man, it is the Pope who is always guided by the Holy Ghost.

There have been two hundred and fifty-nine popes, from St. Peter to the time of our Holy Father Leo XIII. now reigning. Of this number more than eighty have either borne the palm of martyrdom, or have led lives of such eminent holiness that they are numbered among the saints. Scarcely two or three have soiled the chair of St. Peter by notorious vice. The greater part have been men eminent either for their capacity, their piety, or their benevolence. But it may safely be affirmed that not one among them has possessed more charm of virtue than our present Pontiff, Leo XIII.

The peace of God shines from his face. The well known characteristics of his calm and equable nature are goodness and benevolence-a clear intellect, and a constant cheerfulness. His regular features, his eyes of an undefinable expression, and the calm dignity of his manner, are in him the visible signs and outward revelations of the beauty of holiness. He is at once the sovereign Pontiff and the good Father. It is a great happiness to receive the blessing of the Pope, and especially of such a Pope. It is a great happiness to be able to make a pilgrimage to Rome, and to see the successor of St. Peter celebrating the Holy Sacrifice upon the very tomb of the Apostle, and offering to the adoration of the faithful the hidden God of whom he is the Pontiff and the Vicar."

Source: The Fountain of Catholic Knowledge, A Comprehensive Statement of All the Truths of the Holy Religion Together With Notable Presentations of the Glorious Truth Triumphant – Office of Catholic Publications, 1900.