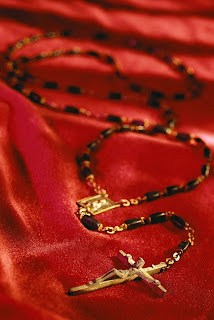 Today I am responding to another unfavorable view of my Catholic faith. This time dealing with "vain" and "repetitious" prayers mostly. The author "anonymous" also mentions Mary in what he/she perceives as some "goddess" in the Catholic faith. I touch briefly on this at this time because I plan a more detailed post on Mary in the Catholic Church in the future. So here's the post from anonymous and my response.
ANONYMOUS writes: I AM A BIBLE READING BAPTIST AND I CAN TELL YOU THAT ROMAN CATHOLICS ARE ALL WRONG AND MESSED UP BECAUSE OF YOUR PAGAN ROOTS. I DON'T SAY THIS TO HURT YOUR FEELINGS BUT TO TELL YOU THE TRUTH SO YOU CAN BE FREE. JESUS WARNED US NEVER TO PRAY WITH REPETITION OVER AND OVER AND OVER "LIKE THE PAGANS PRAY" (PRAYERS WERE REPEATED OVER AND OVER IN THE PAGAN RELIGION OF THE EMPIRE). THAT'S WHY RC'S DO THAT VERY THING TODAY--A CARRYOVER FROM HER PAGAN DAYS AND NOW TOO. THE ROSARY IS A RITUAL OF WORSHIP TO THE VIRGIN GODDESS MARY. YOU CANNOT PRAY/"ASK" ANYONE WHO IS DEAD-THEY'RE DEAF! ALL THE DEAD ARE ASLEEP IN THEIR GRAVES WAITING FOR CHRIST TO RETURN. THEY CAN'T HEAR YOUR VAIN PRAYERS NO MATTER HOW MUCH YOU REPEAT THEM. READ THE BIBLE AND YOU WILL SEE YOUR ERRORS AND LEAVE YOUR PAGAN PRACTICES AND BELIEFS BEHIND TO BE A BORN AGAIN BELIEVER!

My response: Unfortunately, with a view like that I hardly think my humble blog response is going to change your mind about the Roman Catholic Church, but never-the-less I will respond as best I can. First off, I'd like to say clearly the Roman Catholic Church is NOT "all wrong and messed up" and we do not have "pagan roots". The roots of the Catholic Church are found in scripture when Jesus was speaking to his disciple Simon and told him He was changing Simon's name to Rock [Peter] and on that rock Jesus was going to build his Church (Matt.16:18-19). This is the founding and "root" of the Catholic Church. This is when Simon Peter was then made the first Pope of the Catholic Church. He didn't actually start his roll in that position until Christ ascended (Acts 1 and 2). So that answers and debunks your claims to the Roman Catholic Church having "pagan roots". The Catholic Church was founded by Jesus Christ in Sacred Scripture. Now about "repetitious" prayers. There is nothing wrong with repeating a prayer. You are misconstruing the verse (Matt.6:7). The emphasis is on "vain" not "repetition". The pagan prayers were all vain because they were said to false gods. That's it. Jesus himself repeats his prayers to God the Father in Heaven three times while in the garden at Gethsemane (Matt.26:36-46), so we know there is nothing wrong with repeated prayer. Matt. 26:36 "Then Jesus went with his disciples to a place called Gethsemane, and he said to them, "Sit here while I go over there and pray." 37He took Peter and the two sons of Zebedee along with him, and he began to be sorrowful and troubled. 38Then he said to them, "My soul is overwhelmed with sorrow to the point of death. Stay here and keep watch with me." 39Going a little farther, he fell with his face to the ground and prayed, "My Father, if it is possible, may this cup be taken from me. Yet not as I will, but as you will." 40Then he returned to his disciples and found them sleeping. "Could you men not keep watch with me for one hour?" he asked Peter. 41"Watch and pray so that you will not fall into temptation. The spirit is willing, but the body is weak." 42He went away a second time and prayed, "My Father, if it is not possible for this cup to be taken away unless I drink it, may your will be done." 43When he came back, he again found them sleeping, because their eyes were heavy. 44So he left them and went away once more and prayed the third time, saying the same thing. 45Then he returned to the disciples and said to them, "Are you still sleeping and resting? Look, the hour is near, and the Son of Man is betrayed into the hands of sinners. 46Rise, let us go! Here comes my betrayer!" Clearly Jesus is practicing repetitious prayer here, yet we know Jesus was without sin, so repetitious prayer is not wrong. Again the focus is on the word "vain" not repetition.
Now about your statement "THE ROSARY IS A RITUAL OF WORSHIP TO THE VIRGIN GODDESS MARY." -nothing could be further from the truth. First off, Catholics do not worship Mary. Secondly, Mary is not a "goddess" and last, the rosary is not a "ritual of worship". The rosary is a prayer. When a Catholic prays to a saint, we are asking that saint to pray for us and with us. We are not worshiping the saint. Catholics worship God and God alone. The word "pray" or "prayer" has different meanings depending on how it's used. When Catholics say they "pray the rosary to Mary" we do not mean it as a form of worship. Worship is for God alone. When we say we are praying to a saint, we are ASKING the saint to join us in prayer. You seem to believe that saints are dead and not in Heaven. That is not what scripture shows at all. Jesus said all those who died in Christ are alive.
Luke 20:38 "He is not the God of the dead, but of the living, for to Him all are alive."
You then go on to talk about the dead being deaf. Where did you get that idea? From scripture we see a few examples of those who were dead knowing exactly what is happening on earth, from the Old Testament to the New Testament. An example from the Old Testament would be Saul. In 1 Samuel 28 we see Saul speaking with a very dead Samuel and Samuel telling him he knew all that had occurred since his death and what the will of God was and how Saul had angered God. Samuel was dead, but not "deaf" to the world nor ignorant of what had transpired since his physical death on earth. In the New Testament the Transfiguration is a great example of those who had died physically speaking and not "deaf" to what was happening on earth. We read of the death and burial of both Moses and Elijah in the Old Testament but in the New Testament they are speaking with Jesus and not "deaf" at all. Also, in Revelation 5, we see the saints in Heaven offering the prayers from us on earth to God. That is what we call "Communion of Saints", we are in communion with the saints in Heaven because we all belong to the Family of God. Death does not separate the Family of God because all those in Christ are alive as Jesus Christ said in the scriptures. Catholics are not pagans and we will not leave the only Church Jesus Christ founded on earth because you think we should. We are right where He wants us to be. God bless.
Posted by Connecticut Catholic Corner