This is my first time playing along with Jennifer Fulwiler's...

Most repulsive story of the week...(or one of them anyway)
The "Ghost Burger" - topped with an unconsecrated communion host and covered in red wine reduction sauce. 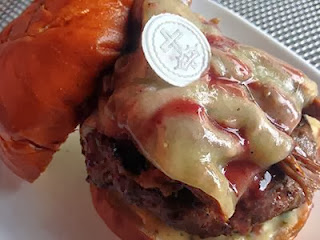 Quote from FoxNews article: "Kuma's Corner, a foodie destination with just a few tables, names its hamburgers after heavy metal bands. For October, the restaurant chose to name the burger after the Swedish band Ghost. Members of the band dress in religious robes and wear skeleton face makeup.
It's in poor taste, said Jeff Young of New Orleans who runs the blog Catholic Foodie.
"It's not, for us, the Eucharist," Young said. "However this wafer is a symbol. There's a cross on it. It's like taking a flag and burning a flag."

A book I really enjoyed...

Description: Miracles are real! And the history of the Church, from ancient times to the modern day, is full of them. God in His mercy has not only given us the revealed truths of Scripture and Tradition, but in all times and places has exercised his power on earth in extraordinary ways: to teach, correct, warn, and inspire His people according to the needs of the age. In Bleeding Hands, Weeping Stone, popular Catholic author and speaker Elizabeth Ficocelli reveals history's most magnificent miracles. Some of them are quiet and simple, some of them are dramatic bordering on outrageous but all of them are signs of God's loving, providential hand at work in the world, continually inflaming our hearts to greater faith and more ardent love. In brisk, easy-to-read accounts, perfect for bedtime or the break room, Bleeding Hands, Weeping Stone relates the amazing (but true) stories of: -The woman who stole a Host from church and hid it at home, only to find that it had turned to real human flesh. The apparition of the Blessed Virgin Mary that put an end to human sacrifice in Mexico and the miraculous image she left for us there. -The pious farm girl who prayed to share in Christ's Passion, and received miraculous wounds on her head, hands, feet, and side. For twelve years until her death she lived on nothing but the Eucharist. -The arrogant knight who demanded the largest Host at Communion and was swallowed up by the stone floor of the church! (You can still see the holes today.) -Saints who could levitate, glow with inner light, or appear in two places at once, and whose bodies did not decompose even hundreds of years after death. -And many more miracles, from the obscure and near-forgotten to the most significant apparitions and prophecies of our faith. You're sure to enjoy reading and sharing these stories of God's miraculous workings in history. But Bleeding Hands, Weeping Stone does more than tell stories: it explains why God performs miracles, and what our disposition should be towards them. So let these pages deepen your faith in God's ever-present love and care.


--- 4 ---
LifeSiteNews is hosting a "Day of Prayer and Fasting for Pope Francis" because of the confusion caused by his recent interviews. 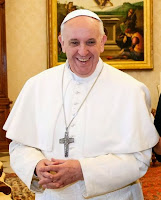 From their website: A Pope is likely the most prayed for of all persons on earth. Everyday, he is mentioned in every Catholic Mass and he is prayed for in a special way by most religious orders and members of most Catholic movements around the world. So, regardless of whatever weaknesses and poor judgement he may have, there is real hope that any newly elected Pope will grow into a holy, great leader as a result of those prayers.
However, right now we need to add to all the usual prayers some extra special prayer and fasting for Pope Francis because of the current circumstances. Non-Catholics are most welcome to join in as well because of the huge influence on the world that a Pope can have.
To encourage this most necessary prayer, some of the LifeSiteNews staff have set up a special Pro-Life day of prayer and fasting for Pope Francis Facebook page.
The date set for this prayer and fasting is this Friday, Oct. 4, the feast day of St. Francis of Assisi, the  Pope’s patron. Check it out here. You are encouraged to add a post noting that you are joining in. Also invite friends and family to take part in the effort to pray for Francis.
If we do this, then we can be assured that we have done the very best thing possible in response to this controversy. Words have their limits compared to prayer.
It appears that Francis needs a stronger guiding light to help him in his incredibly challenging role. Inspired, courageous, authentic spiritual and moral leadership is desperately needed to fill a great vacuum of such leadership in much of the world in our time.
If that does not happen, other, extremely unpleasant things are certain to soon fill that vacuum.
We don't want to go there.

Saint of the Day
St. Francis of Assisi (1181-1226)The son of a rich merchant, Francis spent over a year as a prisoner of war, where he experienced a conversion. Inspired by the Gospels, he dressed in rags and begged for food. When his family disapproved, he formally renounced his wealth and inheritance. He preached in the streets, visited hospitals, served the sick, composed hymns, and regularly performed manual labor. When hundreds started following him, he received the blessing of the pope to start the Franciscans. Soon, his followers numbered in the thousands. While on a retreat meditating, Francis received the stigmata. He died with the words "Bring my soul out of prison" on his lips.

One of my favorite blog posts of the week is "Norman Anderson on Church donuts". Norman was a guest blogger on Fr. Longenecker's Patheos Blog today.


"Guest blogger Norman Anderson is married to Marjorie and is a Catholic father of high schoolers Kevin, Marybelle and Hazel. He works as a claims adjuster at Skinner’s Insurance Incorporated. He attends St Martha’s Catholic Church in Adam’s Falls, North Carolina. Norman is a suburban hermit."

For my last 'Quick Take' I am going to share a link to an article I wrote on the DANGERS of watching, believing or following the "Long Island Medium" Theresa Caputo.

I am sharing this archive article because the "Long Island Medium" returns with new episodes this month and people are charmed and amazed by her "abilities" with no regard for WHERE those abilities come from.  Please read the article and share with friends, this is dangerous to get mixed up with- most especially for children watching the show.