I have a public confession to make...I was wrong

"Confession heals, confession justifies, confession grants pardon of sin. All hope consists in confession. In confession there is a chance for mercy. Believe it firmly. Do not doubt, do not hesitate, never despair of the mercy of God. Hope and have confidence in confession." --St. Isidore of Seville

I have a public confession to make...


This morning, like most mornings, I sat down to read my emails and was bombarded with new “Pope Francis” Google Alerts.  Among them, were a few that [purposely] indicated the Pope had again said something controversial.

I read it and was not happy.

The article quote that irked me was [and I quote them exactly as it is in their own article]...

"Nuns must not be too spiritual, and must endeavour to be experts in humanity in order that convent life is not purgatory," he said.

Looks like those are the exact words of the Pope right?  They use quotes and end with "he said"- it seems like a direct quote from Pope Francis.

It looked that way to me. 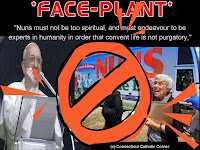 “He gave them *THE* worse message he possibly could...[insert photo] There'll be no stopping them now Francis, thanks a heap. *sigh*”

I let my frustration of another “bad” news story from a media source [that twisted the actual story about the Pope] influence me and what I spread through my media outlets.

After ranting on my blog, I took it to Twitter where I sent it not only to all my Twitter followers, but also to Fr. Z, Fr. Longenecker and Michael Voris specifically.

But I was wrong to do those things.

Shortly after sending out my mean spirited rant, I received another Google Alert- this time the entire speech Pope Francis gave was included (if this source is to be trusted at any rate).

Not only are the words from the original article I used as a source twisted, but they are taken out of context. I had used a twisted media source quote for my own rant.  I was wrong to do that.

Here is the full speech given by the Pope as reported by Independent Catholic News.

Pope Francis: Cloistered nuns are called to have great humanity

Shortly after 4.15pm on Saturday, the Pope reached the Basilica of St Clare, home to the community founded by St Clare, friend of St Francis, reside. The pontiff descended into the crypt to venerate the body of the saint and then, in the chapel of the choir, prayed before the cross of St Damian, which according to tradition spoke to St Francis, telling him to repair His house. In this chapel the Pope, accompanied by the Council of Cardinals, and met with the enclosed nuns, speaking with them off the cuff.He said: "I thought that this meeting would be like the ones we have held twice at Castel Gandolfo, alone with the nuns but, I have to confess, I don't have the courage to send the cardinals away. Let us all remain together."When a cloistered nun consecrates her life to the Lord, a transformation occurs that we do not usually understand. Normally we assume that this nun becomes isolated, along with the Absolute, alone with God; it is an ascetic, penitent life. But this is not the path of a Catholic or indeed Christian cloistered nun. The path always passes via Jesus Christ. Jesus is the centre of your life, of your penance, of your community life, of your prayer, and also of the universality of prayer."And therefore, what happens is contrary to what we imagine of an ascetic cloistered nun. When she follows the path of contemplation of Jesus Christ, the path of prayer and penance with Jesus Christ, she becomes greatly human. Cloistered nuns are called upon to have great humanity, a humanity like that of the Mother Church; to be human, to understand all aspects of life, to be able to understand human problems, to know how to forgive and to pray to the Lord for others."Today during Mass, speaking of the Cross, I said that Francis had contemplated it with open eyes, with open wounds, with flowing blood. And this is your contemplation: reality. The contemplation of Christ's wounds! This is why it is so good when people attend the visiting room of a monastery, asking for prayers and talking about their problems. Perhaps the nun does not say anything extraordinary, but her word is inspired by her contemplation of Jesus Christ, because the nun, like the Church, is on a path to becoming an expert in humanity. And this is your path: not too spiritual! When [nuns] are too spiritual, I think of the foundress of the monasteries of your 'rivals', St Theresa, for example, who when one of her nuns came to her to speak about, oh, about these things, said to the cook: "give her a steak!". The humanity of Jesus Christ! Because the Word became flesh, God became flesh for us, and this gives you a great, human, beautiful and mature holiness, the holiness of a mother. And this is what the Church wants you to be: mothers. To give life. When you pray, for example, for priests, for seminarians, you have a maternal role towards them; you help them to become good shepherds for the People of God. But don't forget about St Theresa's steak! It is important."The second thing I wanted to say to you, briefly, relates to community life. Forgive and support each other, because community life is not easy. Make sure that the monastery is not a purgatory, but rather a family. Look for solutions with love; do not harm anyone among you to solve a problem. Cherish community life, because when the community is like a family, the Holy Spirit is among the community. I beg for you the joy that is born of true contemplation and of a beautiful community life. Thank you for your welcome and pray for me, please. Don't forget".[end]

That was beautiful and perfect.  I was [stupidly] stunned that so many media outlets had twisted the Pope’s words so horribly!  And disgusted with MYSELF that I had participated in it by spreading it!

I was faced with the option of letting it go- after all, it was in SOME media articles, or I could delete it.

I deleted it from my blog and from Twitter, but that wasn’t enough.  How could it be?

I had sent my rant and the image out there for all my readers/followers to see and merely deleting it would not remove any damage it might have caused anyone.  Not only that, but I had mistakenly yet mean spiritedly slandered my Pope!  I was wrong on many counts and I need to do what I can to fix it.

I am starting here and will end in Confession with my priest.

So I removed the offensive rant from my blog and Twitter, and I am admitting my wrong and asking for my readers and Twitter followers to forgive me. I was wrong.
Now I will be off to Confession where I will ask God to forgive me too.

"We should perform our penance overwhelmed with joy at being able to satisfy God, whom we have offended, and at finding such an easy means of effacing our sins which should have earned eternal sufferings for us." -- St. John Vianney

"Confession heals, confession justifies, confession grants pardon of sin. All hope consists in confession. In confession there is a chance for mercy. Believe it firmly. Do not doubt, do not hesitate, never despair of the mercy of God. Hope and have confidence in confession." --St. Isidore of Seville