It's really time Christians had an alternative to Facebook.

Over at ChurchPop today there are two articles on popular Catholic Facebook pages being shut down by the Zuckerberg zombies. 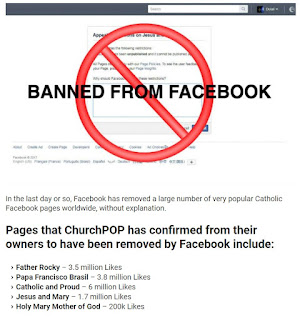 These are clearly widely popular Catholic Facebook pages with millions of Likes and followers.

ChurchPop quote: “It is extremely heartbreaking,” Kenneth Alimba explained. “It’s too horrible.”
Alimba, a Catholic who lives in Nigeria, was the owner of the Facebook page titled “Catholic and Proud.” It had over 6 million Likes when it was removed by Facebook today without explanation. He had another page titled “Holy Mary Mother of God,” which had around 200,000 Likes and was also removed.
His pages are just two of possibly dozens of Catholic Facebook pages simultaneously removed around the world in the last day or so, including the “Father Rocky” page (3.3 million Likes) and a popular Portuguese-language Pope Francis page called “Papa Francisco Brasil” (3.8 million Likes).
“I’ve worked on the page for over five years,” he told ChurchPOP, “and have put in all I am into it.”
Godwin Delali Adadzie, the owner of another removed Catholic Facebook page “Jesus and Mary,” with 1.7 million Likes, also shared his story with ChurchPOP.
“This page is the joy of my apologetics ministry online. It is like the digital heartbeat of my ministry.”

Earlier a Catholic priest was suspended from his Facebook account for posting about the history of Islam. (We know how much the left hates true history) 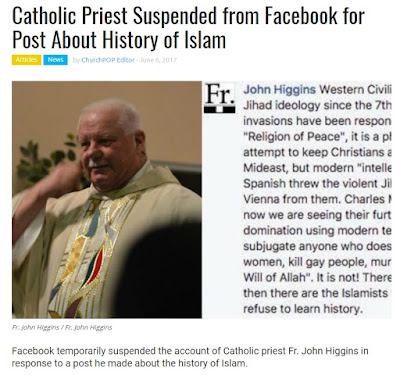 Church Militant has an article about Facebook silencing conservatives who use Facebook to try to educate the public about the dangers of Islam terrorism and the push for sharia law in numerous countries around the globe.

CM quote: Facebook is continuing to censor Conservative websites critical of Islam.
Steve Amundson, founder of Counter Jihad Coalition, told Church Militant that Facebook has been locking him out of his page, Counter Jihad Coalition, since July 11.
Amundson uses his Facebook page and website CounterJihadcoalition.org to "educate people on political Islam, the threat of sharia and the violence that's in political Islam."

In another timely article on Church Militant's website, Christine Niles warns about the silencing of anyone the Zuckerberg zombies deem "racist" or "zenophobic".

CM quote: Shortly after, Facebook implemented its "Initiative for Civil Courage Online" to delete what it deemed "racist" or "xenophobic" comments. But Douglas Murray at the Gatestone Institute warned it was a tool for further censorship of legitimate conservative voices.
"The sinister thing about what Facebook is doing is that it is now removing speech that presumably almost everybody might consider racist," said Murray, "along with speech that only someone at Facebook decides is 'racist.'"

Church Militant's Michael Voris is clearly seeing the writing on the wall and is taking steps to protect his Catholic voice on the Internet by purchasing CM's own internal server so that it's material doesn't suddenly disappear at the whim of some leftist media platforms that could pull the plug on them at any moment like Facebook has done to so many Catholics.

What will become of my fellow Catholic bloggers and I if Blogger and WordPress etc, decide to silence us?

If anyone knows of a Catholic platform or has been toying with the idea of creating one such platform, now is the time my friends.