This weeks Surfing the Internet 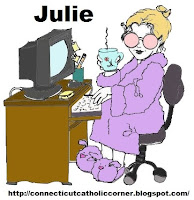 One of my favorite things to do on the weekend is make a huge mug of Black English Breakfast tea with honey (heavenly stuff), lock myself in my home office for a few hours and surf the Internet in my pajamas. 😎

I laugh, I cry and I rage at my computer screen while my fingers click from one news story to another. I am a creature of habit and this is a must for me on the weekends. My family knows to leave me alone until the tea pot is empty and my weekend ritual is finished.

One of the first news stories I found this weekend was over on Aljazeera about Pope Francis, titled "Is Pope Francis a real reformer?". The interview was between Austen Ivereigh who believes Catholics who love the pre-Vatican II Church are delusional because that Church is dead and gone and isn't coming back, and Matthew Schmitz from First Things, who has to fight to get a word in.

No one who reads my blog will be surprised when I say Ivereigh makes me want to scream. We clearly do not see the Catholic Church nor Pope Francis at all in the same ways.
It saddens me to see Ivereigh and those like him who think the Church needs to "move with the times" as host Mehdi Hasan states. Why? Look around you. Are the times we are living in so wonderful and wholesome and holy that the Church needs to embrace our modern society? Of course not! So why, oh why would anyone want to the Catholic Church to "move with the times" and change Her doctrines to fit our morally bankrupt society? Ridiculous!

This is precisely why I love the pre-Vatican II Church so much. They spoke clearly and in definite terms. No grey areas to give people false hope that one day...this or that will happen. It's misleading. Even if you love Pope Francis, you have to admit he is misleading. He does it all the time, he will state (on occasion) authentic Church teaching, and then come out with statements that are misleading like his "Who am I to judge?" comment, and when Francis said don't focus so much on abortion and gay marriage, and his letter to the Argentine Bishops to allow Holy Communion to people in mortal sin and his refusal to answer the dubia. All misleading people into thinking something has or is about to change in Catholic teaching.

It's infuriating to me. 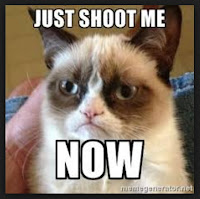 The next story that caught my eye falls into my "Just shoot me now" category.

Over at The Washington Post, I found the article "Hundreds pack DC hall to discuss podcast exploring Harry Potter as a sacred text" by Julie Zauzmer and Michelle Boorstein.

Harry Potter as "sacred text"? Oh how far humanity and faith has fallen.


Quote: "Mark Kennedy grew up a Catholic, and a Harry Potter fanatic. Only one stuck.
“I considered myself a non-spiritual person,” he said. He thought he was done with religion. And then he stumbled on the podcast “Harry Potter and the Sacred Text.”
The podcast told him that the Harry Potter series — the books that he always turned to for solace when he was angry or stressed or in need of an escape — could be a source of spiritual sustenance.
“I feel like I’m born again,” he said."

Born again from a Harry Potter podcast? Harry Potter as "spiritual sustenance"? Sustaining what exactly? Not the soul! Clearly the "new evangelization" the Church continually promotes is a complete failure if this is the result!

The founders of the podcast are Harvard Divinity School graduates Casper ter Kuile and Vanessa Zoltan, and they are as confused and lost as those "born again" by their New Age nonsensical efforts.


Quote: Zoltan and ter Kuile are complicated evangelists for
their own cause. Even as their following grows, they are still pondering some big questions: Can non-traditional types of meaning-making build community? Can texts that are deeply moving to readers truly hold them to account in the way Scripture has among the God-fearing? Neither one of them puts much faith in Humanism, though Zoltan tried working as a chaplain at the lively, cutting-edge secularism center at Harvard called the Humanist Hub, where there is a Sunday school for kids based on ethics. People who don’t want to join an organized religion aren’t looking to label themselves part of a religion for atheists either, ter Kuile said.
“That’s all being unbundled. You might get your ecstatic experience at Soul Cycle, and your community in your book group, and your [spiritual] formation in Harry Potter or ‘On Being,'” he said.

I am as appalled at their definition of what a church sanctuary is as I am at their promoting Harry Potter as some sort of new religion that of course, won't use the word "religion" to describe it's self because "religion" is a bad word now.

This is how they put their Scripture studies education to work.


Quote: "They said that their podcast doesn’t aim to offer all the benefits of a religious community, but does strive to provide the moral insights that seekers gain from study of Scripture. In their podcast, they use the rigorous methods they learned in divinity school, like the Benedictine monks’ practice of lectio divina and the medieval florilegium, to parse the lines of Harry Potter, which they typically refer to as “the text.” 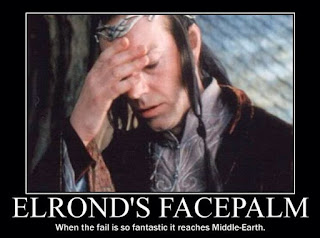 
Quote: Following a Jewish study method called Pardes, they analyzed the sole sentence on four levels, leading from the actual events of the story — a professor, looking at a moving map to see if it reveals that his students are in trouble — to an eventual sermonic conclusion. “I think what I would preach is that everybody needs to be taken care of in different ways. You should take care of the person in the form they need to be taken care of, not in the way that works for you. We have to teach each other how to take care of each other,” Zoltan said.
She said in an interview that she hopes this sort of close reading teaches moral values.
“To me, the goal of treating the text as sacred is that we can learn to treat each other as sacred. If you can learn to love these characters, to love Draco Malfoy, then you can learn to love the cousin you haven’t spoken to for 30 years, then the refugee down the street,” Zoltan said."

What's wrong with actual sacred text and the Good Samaritan story in the Bible?

Where do you even begin with people like this? It's tragic really.

This last story, was personally refreshing for me to read.

Having known a few Mormon's and several Seventh-Day Adventists, I was always lucky not to be spit on by them in their rabid attempts to save me from my idol worshiping paganized Mary church (A.K.A. Christ's Holy Catholic Church) that was damning my soul. (Yes, they actually told me things like that and worse.)

So reading a story about Catholics, Mormons and SDA people coming together to help the less fortunate was really quite nice.😇

Quote: What happens when a Mormon, a Catholic and a Seventh-day Adventist walk into an apartment complex?
On Thursday, the answer was: Something good.
Members of the three churches did some heavy lifting Thursday evening, moving 200 bed frames and mattresses into a new 50-unit apartment building for homeless families in Spokane Valley.
Teenagers, retirees and plenty in between marched lines of boxes and rolled-up mattresses into apartments as coordinators with clipboards managed the chaos and tracked the flow of furniture.
The project started when Cheloye Penwell, community service director for the Spokane Valley Stake of the Church of Jesus Christ of Latter-day Saints, called Catholic Charities in early June asking how they could help with that group’s latest effort to build houses for homeless people.
The project, Pope Francis Haven, finished construction earlier in the summer and Catholic Charities was readying units for families to move in.
“I said, here’s what we don’t have. We don’t have mattresses and we don’t have bed frames,” said Monique Kolonko, Catholic Charities’ executive vice president of stabilization and housing.
Penwell decided she’d take care of it. The local stake applied for $50,200 through the church’s humanitarian fund in Salt Lake City. She got word the request had been approved one week ago, and found out the following day that the truck would be delivering the goods July 20.[clipped]

What stories caught your eye or got your goat this week? Please share them in the comments area below or send me an email! I'd love to hear about them.