Calling all Catholic priests...why are you abandoning women?

I read a book years ago called "The End of the Present World and the Mysteries of the Future Life" by Father Charles Aminjon because Saint Theresa of Lisieux wrote "Reading this book was one of the greatest graces of my life."

After reading the book, I completely agree. In the book is a small passage where St. Bernard is quoting from his book on the life of St. Malachy.

Quote page 153: "This saint [Malachy] relates that one day he saw his sister, who had been dead for some time. She was doing her purgatory in a cemetery. On account of of her vanity and the attention she had devoted to her hair and body, she had been sentenced to live in the very grave where she had been buried, and to witness the dissolution of her body. The saint offered the Sacrifice of the Mass for her for thirty days; at the end of this period he saw his sister again. This time she had been sentenced to complete her purgatory at the gate of the church, doubtless because of her irreverent demeanor in the holy place; perhaps she had distracted the faithful from the Sacred Mysteries in order to draw eyes and appreciation to herself. She was exceedingly sad, wearing a mourning veil, and was in extreme anguish. The saint offered the Sacrifice once more for thirty days, and she appeared to him for the last time in the sanctuary, with unruffled countenance, radiant in a white robe. The bishop knew by this sign that his sister had gained her deliverance."

I came across another quote, that says nearly the same thing.


'We read also in Father Nieremberg that a noble lady, who was exceedingly pious, asked God to make known to her what displeased His Divine Majesty most in persons of her sex. The Lord vouchsafed in a miraculous manner to hear her. He opened under her eyes the Eternal Abyss.There she saw a woman a prey to cruel torments and in her recognized one of her friends, a short time before deceased. This sight caused her as much astonishment as grief: the person whom she saw damned did not seem to her to have lived badly.Then that unhappy soul said to her: "It is true that I practiced religion, but I was a slave of vanity. Ruled by the passion to please, I was not afraid to adopt indecent fashions to attract attention, and I kindled the fire of impurity in more than one heart. Ah! If Christian women knew how much immodesty in dress displeases God!" At the same moment, this unhappy soul was pierced by two fiery lances, and plunged into a caldron of liquid lead.' Source: Rev. F.X. Schouppe, S.J.[SaintsWorks.net]

The issue of immodesty and women's vanity is a huge issue in society that most women today are completely unaware of. They do not know that immodest clothing and vanity are deadly to their souls. Hollywood, fashion, magazines and social media whores like the Kardashian's have blinded women to true virtue and dignity found in modesty.

But the blame doesn't rest solely on them. The responsibility is really on the Catholic Church (Matthew 28:16-20) to lead by teaching these things to the laity to save our souls. If the Church doesn't do its duty to teach us right from wrong, secular society will poison us with their lies.

Sheep are generally dumb, they follow whatever shepherd is leading and right now secular society's demonic shepherds are leading countless sheep to Hell because there are so few good shepherds among the wolves in the Church willing to lead the flock to Heaven.

This week on Twitter, Catholic priest Fr. Kevin Cusick (whom I believe is a very good priest and I have enjoyed following him on social media for years) put out the following tweets: 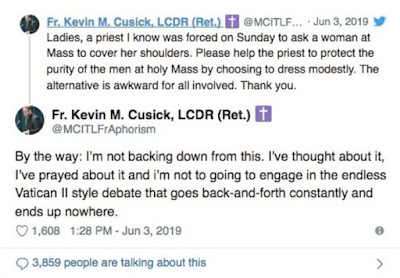 All Hell broke loose and swarms of diabolical idiots (Catholics included) attacked this priest for daring to tweet out Catholic teaching.


'The parish priest and especially the preacher, when occasion arises, should according to the words of the Apostle Paul (2 Tim. iv, 2) insist, argue, exhort and command that feminine garb be based on modesty and womanly ornament be a defense of virtue. Let them likewise admonish parents to cause their daughters to cease wearing indecorous dress.'
Decree of the Congregation of the Council (by the mandate of Pope Pius XI), 1930 A.D.


Fr. Cusick decided to delete his entire Twitter account and leave the fight, much to my disappointment. His explanation can be read on The Wanderer.

Recall just a few months ago in March, a Catholic mother of four sons wrote a letter to the Editor of her local paper about women wearing leggings to Mass.


Quote: "The emergence of leggings as pants some years ago baffled me. They’re such an unforgiving garment. Last fall, they obtruded painfully on my landscape. I was at Mass at the Basilica with my family. In front of us was a group of young women, all wearing very snug-fitting leggings and all wearing short-waisted tops (so that the lower body was uncovered except for the leggings). Some of them truly looked as though the leggings had been painted on them.A world in which women continue to be depicted as “babes” by movies, video games, music videos, etc. makes it hard on Catholic mothers to teach their sons that women are someone’s daughters and sisters. That women should be viewed first as people — and all people should be considered with respect." "...  I wonder why no one thinks it’s strange that the fashion industry has caused women to voluntarily expose their nether regions in this way. I was ashamed for the young women at Mass. I thought of all the other men around and behind us who couldn’t help but see their behinds."

Mass hysteria erupted over this on social media attacking this Catholic mother and her sons (I wrote about it HERE).

I don't have any expectations that non-Catholics in our secular society will understand the importance of modesty, but I am truly floored by the venom from 'Catholics' who attacked Fr. Cusick for his tweet.

It's like modern society has put the stamp of approval on revealing clothing, so God must accept it too.

More over, our Catholic clergy have a responsibility to TEACH THE FAITH whether we like hearing it or not!


4 "I charge you in the presence of God and of Christ Jesus who is to judge the living and the dead, and by his appearing and his kingdom: 2 preach the word, be urgent in season and out of season, convince, rebuke, and exhort, be unfailing in patience and in teaching. 3 For the time is coming when people will not endure sound teaching, but having itching ears they will accumulate for themselves teachers to suit their own likings, 4 and will turn away from listening to the truth and wander into myths. 5 As for you, always be steady, endure suffering, do the work of an evangelist, fulfill your ministry."

Catholic priests are here for the sole purpose of saving souls! It's your calling! It's your duty!

You are our Fathers (1 Cor. 4:15)! Correct us! Lead us! Love our souls enough to die for them. That's what Jesus did. It's what He called YOU our clergy to do.

To all the Father Cusick's out there where ever you are, please, please do not run away from the flock! Souls are at stake here. Don't abandon the sheep to the wolves of secular society. 🙏 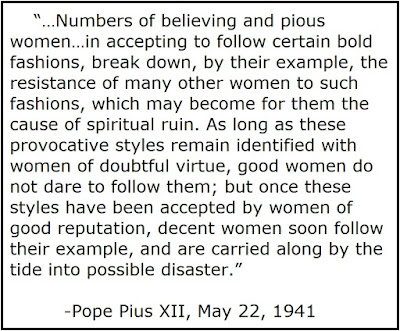