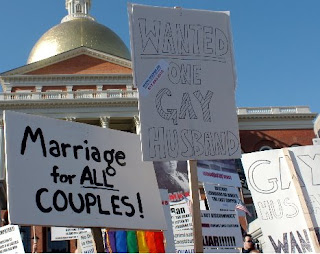 Anonymous writes: (referencing post"Christians And Same Sex Marriage"): "I am a gay Catholic and after reading some of the hate words on this website I too am questioning my faith. Marriage is not between a man and a woman. It is between two souls. I think the Catholic Church needs to concentrate on molestation by many of these priests, who are in the closet gays. Catholics should love all other Catholics regardless of what they do. It is time to take your beliefs and bring them to par with modern times. If Jesus, who loved ALL even the "sinners," were here right now he would be disgusted by such disgusting words."

My response: What "hate words"? Marriage is NOT "between two souls", marriage is between a man and a woman. God instituted marriage in the bible and no where does it say it's "between two souls", it says 'man and woman' and then we are given numerous examples of marriages in the bible, none of which show same sex marriages. That is just a fact. There is nothing hateful about it, it is just what God created and instituted. God created Eve- woman- FOR Adam, he didn't create another man. Marriage is a sacrament- as a Catholic you should know this. Sacraments are instituted by God and can NOT be changed by any human, not even a pope. The authority to change a sacrament was not given to mankind, that authority remains solely with God. Our Catholic beliefs are with God, not "modern times". Following "modern time" beliefs will lead you straight to Hell, follow God's teachings leads to Heaven and eternal life. The choice is yours as God gave you free will and you, as all of us, will be held accountable for that free will one day.

Catholic Catechism: #2335 "Each of the two sexes is an image of the power and tenderness of God, with equal dignity though in a different way. The union of man and woman in marriage is a way of imitating in the flesh the Creator's generosity and fecundity: "Therefore a man leaves his father and mother and cleaves to his wife, and they become one flesh." All human generations proceed from this union. "

#2363 "The spouses' union achieves the twofold end of marriage: the good of the spouses themselves and the transmission of life. These two meanings or values of marriage cannot be separated without altering the couple's spiritual life and compromising the goods of marriage and the future of the family.
The conjugal love of man and woman thus stands under the twofold obligation of fidelity and fecundity."

#2357 "Homosexuality refers to relations between men or between women who experience an exclusive or predominant sexual attraction toward persons of the same sex. It has taken a great variety of forms through the centuries and in different cultures. Its psychological genesis remains largely unexplained. Basing itself on Sacred Scripture, which presents homosexual acts as acts of grave depravity, tradition has always declared that "homosexual acts are intrinsically disordered." They are contrary to the natural law. They close the sexual act to the gift of life. They do not proceed from a genuine affective and sexual complementarity. Under no circumstances can they be approved."
#2358 "The number of men and women who have deep-seated homosexual tendencies is not negligible. This inclination, which is objectively disordered, constitutes for most of them a trial. They must be accepted with respect, compassion, and sensitivity. Every sign of unjust discrimination in their regard should be avoided. These persons are called to fulfill God's will in their lives and, if they are Christians, to unite to the sacrifice of the Lord's Cross the difficulties they may encounter from their condition."

#2359 "Homosexual persons are called to chastity. By the virtues of self-mastery that teach them inner freedom, at times by the support of disinterested friendship, by prayer and sacramental grace, they can and should gradually and resolutely approach Christian perfection."

This is the official teaching of the Catholic Church.
Posted by Connecticut Catholic Corner