How's A Catholic To Vote? 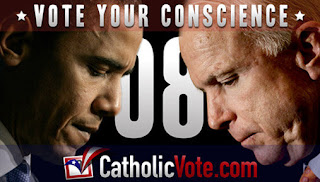 Politics gets so ugly so fast that I truly try to stay away from it on this blog. I wouldn't dream of telling a Catholic (or non-Catholic) how to cast their vote. I am not going to personally support any candidate on this blog either. What I hope for all voters is that they take some time to get to know who's running for what and on what issues and what their past says about them. This goes for local elections right to the White House. Every vote is important and while you may not see a "great" choice, there is always a choice to be made and a vote to be cast so please vote. If the last few elections have taught us anything, it is that TRULY EVERY VOTE COUNTS!
Weigh the issues- we've sure got enough of them to consider! There's the war, the economy, abortion, illegal immigration, taxes, health insurance or the lack of, the national debt, global warming/ the environment, jobs going overseas, stem cell research, terrorism, high food & gas prices and more. Look at them all and weigh them against the candidates looking not at just what they say they "hope" for the future (after all we've all got hopes and many times they just don't come true). Look at the candidates past. Where did they stand on these issues years ago? Are they standing on the issues important to you? What have they done or said prior to running for office about this stuff?
Look at the whole package and make an informed decision then you can cast your vote with a clear conscience and know you've done your best in voting for America's future. There are a lot of "undecided" people out there right now who can honestly see the good and bad in either candidates winning the White House. So this post is mostly to the undecideds out there (and there are many of you- that I've talked to anyway).
For Catholics a big issue is abortion and the death of a human life it causes. I hear many Pro-life Catholics saying "Yeah but the war is killing people too." Very true, I completely agree. War and abortion both kill, no doubt about it. So does embryonic stem cell research. These things must be considered. But so must other issues, like the economy. What happens in a poor economy where people are losing jobs and homes? Abortion rates climb because people who under better circumstances wouldn't even consider an abortion suddenly panic because of finances and get an abortion. Also crime goes up. Human life is the most important thing, or it should be to all of us. Human life is precious and must be protected in all ways in all areas. From abortion, from embryonic stem cell research, from war, from starvation, from no medical help and from terrorism and other threats. These are all real issues that need to be considered before casting our votes. There are tons of things on the web about this candidate or that one, some truthful some not, some good some bad. One source is YouTube. Today I received an email from someone sharing a Youtube video on the issue of our economy and the "bail out" mess (though this video is not a fan of the Dem. party). I want to say first that I personally do not lay the blame of our economy on any one person or party. I think the blame is spread around to a great many who are guilty on all sides. But for those interested, I am going to share the Youtube video I received. Take from it what you will or ignore it completely. I truly believe both McCain and Obama have a true desire to help our country through this difficult time, they just have very different ideas about how to do that. May God bless you all and guide you in voting!
Posted by Connecticut Catholic Corner