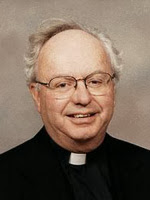 Is it any wonder why we [the Church] have so many clueless ignorant self professing Catholics in [and out] of the pews who think mortal sin isn’t mortal or a sin when our own clergy are heretics?

The Chicago Tribune shared this letter from a CATHOLIC priest:

"I am a retired pastor of a Catholic church in Edgewater where there are many gay and lesbian couples, many of whom are doing their best to raise children as a family. I admire their constancy and care while they continue to belong to a church that “officially” seems wrongheaded and bizarre in its resistance to legalization of same-sex marriage. Lobbying and liturgical pyrotechnics are both costly and embarrassing. At times I have wondered why faithful Muslims do not distance themselves publicly from their fellow believers who perpetuate violence. I wish to distance myself publicly from the misguided efforts of Bishop Thomas Paprocki of Springfield and his rite of exorcism. God bless Gov. Pat Quinn and all who are trying to live a life of faithful love.— Rev. Bill Kenneally, Pastor Emeritus, St. Gertrude Parish, Chicago

This isn’t the first time this Catholic priest has disagreed with the Church or acting (in MY opinion) in a heretical way.  Back in 2004 the Archdiocese shut down Rev.Kenneally’s attempts to show a controversial play in the parish about abortion – complete with a mythical politician sadly being denied Holy Communion by the big bad mean Catholic Church because he politically supported the right to abortion.

When St. Gertrude’s bishop, Bishop Francis Kane came down on the parish with a resounding “NO!”, Rev. Kenneally decided if he couldn’t show the play in the parish, he would find another building where the Bishop couldn’t control him and show the play anyway.

No surprise really, as Rev. Kenneally had the previous spring hosted pro-abortionist Rev. Jesse Jackson to St. Gertrude’s parish in Chicago.
Rev. Kenneally is not alone –that’s the scary thing.  There are sadly, far, far too many Catholic priests who are helping people INTO Hell, rather than helping them avoid Hell.  When the Catholic clergy fail to teach AUTHENTIC OFFICIAL Catholic teaching, they are leading people INTO Hell.

Kenneally spoke to The Chicago Tribune in 2002 about his views of Catholic Bishops...

"The truth of the matter is that there's one Christian church, and we have a lot of different flavors. Nobody says that. It's because people in administrative positions, like the bishops, are concerned about their particular brand. Also, the bishops aren't capable of teaching. They have a kind of a rant, and then they continue to quote themselves about the stuff nobody cares about."

He didn't stop there.  No, instead he FLAUNTED his ability to oppose the Church because "there is no one to stop him"...

"I don't have to be politically correct or religiously correct or anyway correct. I've got three more years [until he turns 70 and can retire]. I have total job security. There's no one to take my job. The barrel -- we're at the bottom. Now what's happening is that, when you turn 70, they say, "Can you stay longer?"

The ever liberal heretic Kenneally is also openly supportive of women priests:

"The Rev. Bill Kenneally, who lives in the Beverly neighborhood on the South Side, is among the protesters. Father Kenneally, the 75-year-old retired pastor of St. Gertrude’s Church and volunteer at St. Barnabas Church, said he “and a majority of priests, truthfully” do not agree with the church’s “vapid reasoning” for excluding women. Father Kenneally said he is unfazed by possible reprisals. “Since I’m retired,” he said, “it’s not like they can take a church away from me.”

Heresy in the Church is the most damning and devastating issue facing the Church.  Once the “devil and his lies” are in the Church, they MUST be exorcised OUT.  I applaud Bishop Paprocki in his efforts to exorcised evil- as should ALL Catholics- most especially our clergy.  Yet here we have a retired Catholic priest who is CONDEMNING a bishop who is fighting evil and trying to save souls.

Catholic Catechism: #2089 Incredulity is the neglect of revealed truth or the willful refusal to assent to it. "Heresy is the obstinate post-baptismal denial of some truth which must be believed with divine and catholic faith, or it is likewise an obstinate doubt concerning the same; apostasy is the total repudiation of the Christian faith; schism is the refusal of submission to the Roman Pontiff or of communion with the members of the Church subject to him."11

Perhaps it is Kenneally [and those like him] who need to be exorcised- at the very least disciplined PUBLICLY because he wrote this PUBLIC letter which will (as always) have a devastating effect on the souls of others who are misled by this “Catholic” clergy.

May the Holy Spirit slap Kenneally with the Truth before it’s too late for his own redemption.