The Vatican honoring gays and Lucifer?

The Vatican honored an openly gay teen [Jack Andraka] with the International Giuseppe Sciacca Award for [“outstanding youths”]  for developing an early pancreatic cancer test.  He was honored at the Vatican despite openly supporting gay rights and wanting to be a gay role model.  He believes the Vatican’s stamp of approval is a wonderful endorsement and move forward for gay rights.

“The 16-year-old junior at North County High School says the award from the Vatican is special.  "It's really amazing to be recognized by the Vatican, especially as a gay scientist. I mean this would be unheard of just a few years ago. To be part of this bridge of progress is really amazing," Andraka told WBAL News. "It just shows how much the world has grown to accept people that are gay and are LGBT. It's really amazing."

The Vatican’s honoring of this openly gay teen is being trumpeted by gay rights groups around the world as another turning point since Pope Francis becoming our pope.

“Jack is also openly gay, and says that his family and a few close friends had known for about three years, and are very accepting.
He says he used to worry that there were few gay role models in the science field, or that he would be perceived as “that weird gay kid.” But now he hopes he can help inspire other LGBT youth to get involved in STEM (Science, Technology, Engineering and Mathematics).”

While I personally think what this teen has developed is a wonderful tool in battling cancer, I do not think it was in the Vatican’s best interest to honor someone who openly opposes what the Catholic Church calls “mortal sin”.

Would the Vatican “honor” an abortionist who discovers a scientific break-through for ending lung cancer?  I doubt it.

So what else has the Vatican done?

Something strange in my personal opinion.

It’s named one of their telescopes… 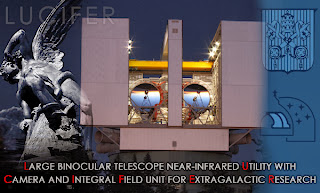 The best name the Vatican could come up with for the WORLD’S BIGGEST Optical telescope is…Lucifer.

Nothing like Christ's Holy Catholic Church honoring the devil. *sigh*

“The Vatican Observatory Research Group (VORG) operates the 1.8m Alice P. Lennon Telescope with its Thomas J. Bannan Astrophysics Facility, known together as the Vatican Advanced Technology Telescope (VATT), at the Mount Graham International Observatory (MGIO) in southeastern Arizona where sky conditions are among the best in the world and certainly the Continental United States.The new instrument on the Large Binocular Telescope is a powerful tool that will gain spectacular insights into the universe — from the Milky Way to extremely distant galaxies.A new instrument for the world´s largest optical telescope, the Large Binocular Telescope (LBT) on Mount Graham, allows astronomers to observe the faintest and most distant objects in the universe.The first LUCIFER observations of star-forming regions are giving scientists an idea of the new instrument´s enormous potential. This image depicts a stellar nursery in the Milky Way about 8,000 light-years from Earth. Such clouds are typically opaque to visible light. However, infrared light detected by LUCIFER can penetrate the dust.”

Just WHAT is going on at the Vatican?


**Update: For people questioning the name "Lucifer" not referencing the Devil, I give you the Catholic Encyclopedia's definition of "Lucifer"

The Syriac version and the version of Aquila derive the Hebrew noun helel from the verb yalal, "to lament"; St. Jerome agrees with them (In Isaiah 1.14), and makes Lucifer the name of the principal fallen angel who must lament the loss of his original glory bright as the morning star. In Christian tradition this meaning of Lucifer has prevailed; the Fathers maintain that Lucifer is not the proper name of the devil, but denotes only the state from which he has fallen (Petavius, De Angelis, III, iii, 4).

Tell me what you think.