What's this business about the Vatican polling Catholics?

Recently the "National *cough* Catholic Reporter" released a story stating that the Vatican was going to poll Catholics:

"It asks the conferences to quiz their populations on topics that sometimes have sharply divided the U.S. church, like the Catholic teaching prohibiting the use of artificial contraception, the possibility of a divorced Catholic to remarry or receive Communion, and the number of young people choosing to live together before marrying."

The ever liberal and dissident Reporter seems to think this "poll" is to CHANGE the Church's teachings on the things mentioned above (when will they learn Christ's Holy Catholic Church is NOT a democracy?).  But that is NOT the case.  The "poll" is find out where all the uneducated Catholics are and to figure out how better to educate them.

Catholics who either are uneducated in their faith by no fault of their own or Catholics who are closet protestants and dream of changing the Catholic faith because they have been beaten with a stupid stick called liberalism so much they actually believe the Church is a democracy to be changed with secularism are being asked questions about issues that never seem to die down even after the Church has spelled it out.  The liberal Catholics are thrilled to hear they are being "polled" because they are so uneducated they actually think the Church is going to change it's teachings FOR THEM! The poor pitiful fools are in for a very big surprise.

At any rate, here is part of the document and the questions being asked with my personal thoughts and comments. 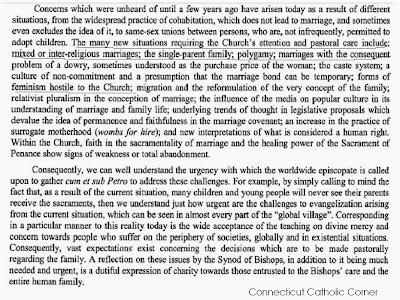 I am not sure where in the world the Vatican calls things like "mixed marriages" and "single-parent family" are NEW, but that is what it says. (Even Saint Paul in the bible talks about mixed marriages- 1 Cor.7)

Now here are the questions to be asked... 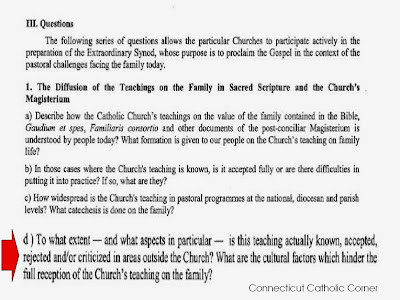 NOTE:  Here is the part to the uneducated Catholics who continually show their ignorance of the Faith when they cluelessly call for female clergy, the "right" to abortion and birth control and gay marriage.

These people should REALLY read about the Reformation and then look in the mirror to see the protestants they really are.  They have two real choices, either repent and ACCEPT Church Authority or continue to reject it and embrace Protestantism- that's what they are. 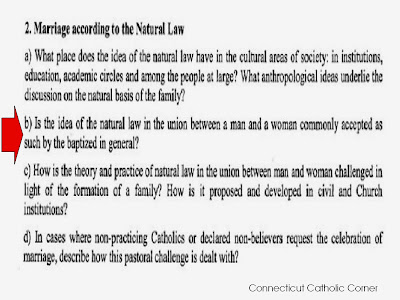 NOTE: Again, a question to uneducated liberal Catholics who tragically think they can reject natural law and tell God what is and is not sin (ie: abortion, gay marriage, birth control etc).

I have a feeling the liberals who are celebrating this "poll" with the idea they are VOTING on changing the Faith are going to be crying their eyes out a year from now. 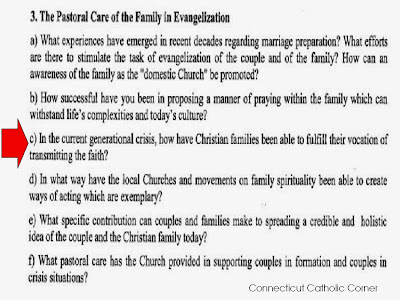 Oh dear... now here is the problem.  Uneducated Catholics and dissident Catholics are passing on THEIR VERSION of the Faith, thus corrupting the next generations.  Parishes MUST find LOYAL EDUCATED CATHOLICS to teach. 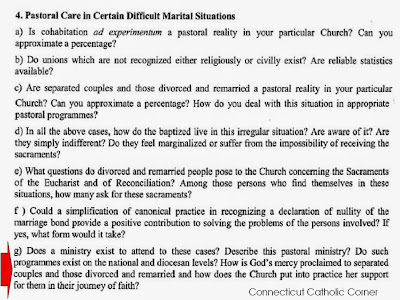 Oh yes, there are "ministries" that exist that all too often promote the WRONG teachings of the Faith.  For example "The Catholic Association for Lesbian and Gay Ministries" (with the late Bishop Joseph Sullivan supporting the gay and liberal agenda) and "The Church of St. Francis Xavier" and their gay and lesbian group "ministry"- complete with gay and lesbian retreats.  Are the active gays and lesbians in these parishes told they are in MORTAL SIN and MUST repent of gay sexual relationships?  Are they told there can NEVER EVER EVER be gay "marriage"?  Are they told God considers gay relationships ABOMINATIONS?  Is the TRUTH told to gays and lesbians in our parishes?

It MUST be told to them- their very salvation depends upon it.  Sin must be called sin.  Priests MUST tell their flock what sin is and WHY they must repent of it.  ALL sex outside of one man + one woman marriages is a sin- heterosexual or homosexual. Why is this TRUTH so often silenced in the Church today?  Hopefully these problems will be addressed once this "POLL" reveals the failings in the Church today. 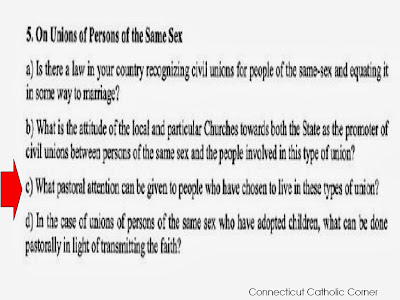 Again, the TRUTH.  Tell people the TRUTH about sin.  If priests refuse to educate their flock they are COMPLETE FAILURES.  Their mission is to save souls- you can't do that without tell the TRUTH, the FULL Gospel TRUTH to people so they can repent, turn from sin and live for Christ.  Bishops need to stop worrying about immigration and start focusing on saving souls.  In the end, that is what matters. 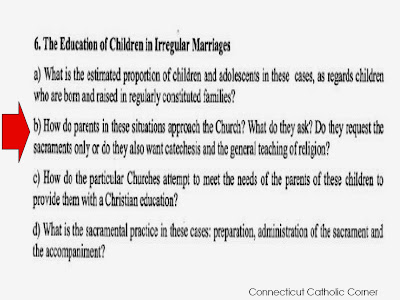 Well when it comes to gay/lesbian parents we've seen them enroll (or try to enroll) their children in Catholic parish schools and then get insulted and scream "hate speech" when the Catholic school teachings the Catholic view on the SIN of homosexual unions.  Do gay/lesbian couples WANT their children to hear the OFFICIAL Catholic view on homosexuals? If not, why put them in Catholic parish schools or even enroll them as members of the Catholic Church for First Holy Communion and Confirmation?  Do these couples wish to CORRECTLY teach their children what the Church teaches or do they wish to change the Church for their personal views?

This is HERESY.  HOW can the Church allow heresy in it's parishes?  This must be addressed- again apparently. 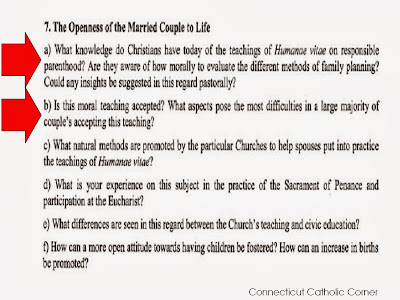 Humanae-who?  Say Humanae vitae and you will probably get a blank stare back.

Is this teaching accepted? I would LOVE to see parishes across the United States ask this question of its members after first explain exactly WHAT Humanae vitae is.

My personal recommendation to the Vatican on this:
Have ALL members of the Catholic Church READ Humanae Vitae and SIGN THEIR NAMES to the bottom proclaiming they ACCEPT and BELIEVE it.

My guess is you'd see Catholics breaking out in hives and running for the exits. 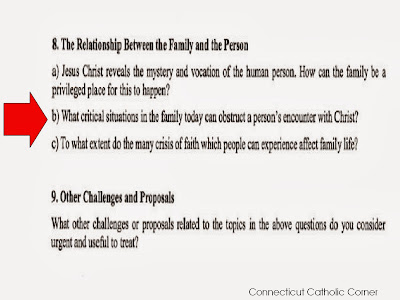 Good questions and I look forward to seeing the answers AND to seeing how Catholics in the United States respond to the outcome.  My own opinion is that uneducated Catholics are teaching falsehoods to their children and jeopardizing their salvation. This is a critical issue in my opinion.