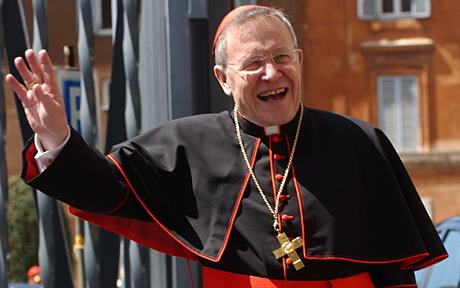 Cardinal Kasper appears to speak out of both sides of his mouth.

On the one hand he admits that there can be only ONE true marriage among a living married couple- if they should divorce and ‘re-marry’ the second so-called ‘marriage’ is not a true marriage -its ADULTERY.  That is Church teaching, always has been, always will be.

"Because they are human and prone to sin, husbands and wives continually must follow a path of conversion, renewal and maturation, asking forgiveness and renewing their commitment to one another, Cardinal Kasper said. But the church also must be realistic and acknowledge "the complex and thorny problem" posed by Catholics whose marriages have failed, but who find support, family stability and happiness in a new relationship, he continued.

"One cannot propose a solution different from or contrary to the words of Jesus," the cardinal said. "The indissolubility of a sacramental marriage and the impossibility of a new marriage while the other partner is still alive is part of the binding tradition of the faith of the church and cannot be abandoned or dissolved by appealing to a superficial understanding of mercy at a discount price."At the same time, "there is no human situation absolutely without hope or solution," he said Catholics profess their belief in the forgiveness of sins in the Creed, he explained. "That means that for one who converts, forgiveness is possible. If that's true for a murderer, it is also true for an adulterer."

Kasper is confused about a murderer -vs- an on going adulterous false marriage…he seems to think that the murderer is forgiven if they continue murdering.  This is NOT repenting.  Repenting isn’t just say “Oh sorry about that!” and then moving on still committing the same sin.  Repenting is truly being sorry and STOPPING the sin- at the very least TRYING to stop the sin.  Does Kasper think a serial killer is forgiven and allowed Holy Communion because he confessed one killing but continues to kill others-thus continuing the sin?

How can a person who remarries STOP continuing in the sin of adultery unless they STOP having sex with their spouse?  If they stop having sex and live chaste lives this isn’t an issue. If they are "married in name only" there is no adultery.  But we all know that is NOT the case.  These "remarried" couples are having sex and they want the Church to not just "tolerate" it, but accept it and tell them they are not sinning because it's "love" (just like the gay "marriage" issue).

Adultery is a MORTAL sin, a person committing MORTAL SIN cannot have Holy Communion.  There is of course forgiveness if a person TRULY is sorry and truly REPENTS. That's the wonderful gift of our Sacrament of Reconciliation.

#1446 Christ instituted the sacrament of Penance for all sinful members of his Church: above all for those who, since Baptism, have fallen into grave sin, and have thus lost their baptismal grace and wounded ecclesial communion. It is to them that the sacrament of Penance offers a new possibility to convert and to recover the grace of justification. The Fathers of the Church present this sacrament as "the second plank [of salvation] after the shipwreck which is the loss of grace."47

#1450 "Penance requires . . . the sinner to endure all things willingly, be contrite of heart, confess with the lips, and practice complete humility and fruitful satisfaction."49

So we first hear Kasper reaffirm that a second "marriage" is not a valid marriage, then we hear him say these adulterers should be forgiven while they continue to commit MORTAL SIN (so no repenting needed) and then we get this...

And out of the other side of his mouth, Cardinal Kasper wants some wiggle room to play around with…he thinks there are special cases which the Church should/could ‘allow’ but not ‘accept’.


The Catholic Church needs to find a way to help divorced and remarried Catholics who long to participate fully in the life of the church, Cardinal Kasper told the cardinals. While insisting -- for the good of individuals and of the church -- on the need to affirm Jesus' teaching that sacramental marriage is indissoluble, he allowed for the possibility that in very specific cases the church could tolerate, though not accept, a second union.

So who are these special cases?  Oh you mean like the rich?  Perhaps the name Kennedy and the like?  Here in the United States we've seen this sort of divorce and "remarriage" for the privileged (and seen it reversed a decade later after YEARS of protest to the Vatican demanding that the Church uphold it's own doctrines).

The issue is remarriage and sex within that marriage when the FIRST marriage is still valid.  It’s adultery any way you slice it.

Perhaps Cardinal Kasper needs to re-read the history of the Catholic Church and King Henry VIII.

The confession of sins

1455 The confession (or disclosure) of sins, even from a simply human point of view, frees us and facilitates our reconciliation with others. Through such anadmission man looks squarely at the sins he is guilty of, takes responsibility for them, and thereby opens himself again to God and to the communion of the Church in order to make a new future possible.

1456 Confession to a priest is an essential part of the sacrament of Penance: "All mortal sins of which penitents after a diligent self-examination are conscious must be recounted by them in confession, even if they are most secret and have been committed against the last two precepts of the Decalogue; for these sins sometimes wound the soul more grievously and are more dangerous than those which are committed openly."54When Christ's faithful strive to confess all the sins that they can remember, they undoubtedly place all of them before the divine mercy for pardon. But those who fail to do so and knowingly withhold some, place nothing before the divine goodness for remission through the mediation of the priest, "for if the sick person is too ashamed to show his wound to the doctor, the medicine cannot heal what it does not know."55