No More Eulogies at Catholic Funerals 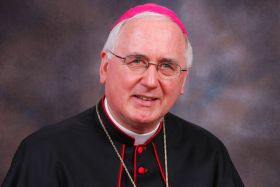 Are eulogies at a Catholic funeral appropriate?  The good Archbishop Terrence Pendergast of Ottawa (Canada) says “no” and I couldn’t agree more.

“In the Christ funeral, we gather not to praise the deceased but to pray for them,” the decree states. “For this reason, eulogies are not given.”

After the decree was made public, people began to complain- probably people who don’t regularly attend Mass so don’t understand what a Catholic funeral Mass is about.

"A short explanation of the decision appears in the fall-winter Catholic Ottawa newsletter, written by Father Geoffrey Kerslake. He argued eulogies or words of remembrance are not an official part of Catholic funeral rites.

“The Archdiocese of Ottawa is implementing a new policy for words of remembrance at a funeral with Mass to encourage us to have words of remembrance spoken outside of the context of the Mass, either at the vigil service in the funeral home or at the reception after Mass,” he wrote."

I think the issue people are having is they attend a Protestant funeral and see people talking, celebrating the dead persons life with laughter and tears and WRONGLY ASSUME that this is what a Catholic funeral is about- it’s not.  Not at all.

Protestants do not pray for their dead, Catholics do.  Our Catholic funeral Mass IS a prayer for that dead person to HELP THEM- not us.  The Catholic funeral is about the dead, while a protestant funeral is about the living left behind.  I know this, because for most of my life I was a protestant and have buried many protestant friends and relatives.  The “funerals” or “memorial services” (depending on which denomination is holding the ceremony) are based on people gathering to share and celebrate the life of the dead person.

“Whenever there’s anything about liturgy or church, despite the fact people don’t go to church, they have something to say about it. The policy of the universal Church is eulogies don’t belong at Mass.”

He went on to say…

“…many ideas from the outer culture had crept into funerals and how we honour the dead.

“If we spend all our time talking about them saying how wonderful they are and canonizing them as some people seem to do at funerals we don’t need to pray for them and I think that would be a great loss,” he said, noting how people misunderstand “the Eucharist as the sacrifice of Christ’s presence being offered for the deceased.”

“The Mass is the supreme gift we can give to a person when they die,” the archbishop said, noting “the homily can make some references to the person’s life of faith,” and the archdiocese will allow a brief, approved three- or four-minute “words of remembrance” to be read by a friend or family member before the funeral Mass begins. Eulogies can be made at the wake, at a reception after the funeral in the parish hall or at graveside, the decree says.

The policy was necessary to “balance what had gotten out of hand,” the archbishop said. It took two years of work by the diocesan presbyteral council made up of priests with a wide range of experience and differing views on how to deal with grieving families, he said.”

The good Archbishop is absolutely correct!

The Catholic Church needs to stop protestantizing its funerals (among other things) and TEACH people WHY a Catholic funeral Mass is so different from other religion's funerals.  What makes our funeral Mass so special?  People need to know.  Sadly, many Catholics are ignorant of these things , we can tell by the things they say and do.

“When people say I’d rather have the eulogy than have Mass then you know we have lost the sense of Catholic life,” Prendergast said.

It’s important to say we pray for God’s mercy, to pray for mercy in God’s judgment, he said. We don’t take that mercy for granted.“I’m trying to preserve for people the richness of the Catholic Mass,” he said. “If we don’t do this now we will lose a great treasure. I don’t want their children or their children’s children not to have this.”

Catholic Catechism1684    The Christian funeral is a liturgical celebration of the Church. The ministry of the Church in this instance aims at expressing efficacious communion with the deceased, at the participation in that communion of the community gathered for the funeral, and at the proclamation of eternal life to the community.
1685    The different funeral rites express the Paschal character of Christian death and are in keeping with the situations and traditions of each region, even as to the color of the liturgical vestments worn.1871686    The Order of Christian Funerals (Ordo exsequiarum) of the Roman liturgy gives three types of funeral celebrations, corresponding to the three places in which they are conducted (the home, the church, and the cemetery), and according to the importance attached to them by the family, local customs, the culture, and popular piety. This order of celebration is common to all the liturgical traditions and comprises four principal elements:
1687    The greeting of the community. A greeting of faith begins the celebration. Relatives and friends of the deceased are welcomed with a word of “consolation” (in the New Testament sense of the Holy Spirit’s power in hope).188 The community assembling in prayer also awaits the “words of eternal life.” The death of a member of the community (or the anniversary of a death, or the seventh or thirtieth day after death) is an event that should lead beyond the perspectives of “this world” and should draw the faithful into the true perspective of faith in the risen Christ.
1688    The liturgy of the Word during funerals demands very careful preparation because the assembly present for the funeral may include some faithful who rarely attend the liturgy, and friends of the deceased who are not Christians. The homily in particular must “avoid the literary genre of funeral eulogy”189 and illumine the mystery of Christian death in the light of the risen Christ.
1689    The Eucharistic Sacrifice. When the celebration takes place in church, the Eucharist is the heart of the Paschal reality of Christian death.190 In the Eucharist, the Church expresses her efficacious communion with the departed: offering to the Father in the Holy Spirit the sacrifice of the death and resurrection of Christ, she asks to purify his child of his sins and their consequences, and to admit him to the Paschal fullness of the table of the Kingdom.191 It is by the Eucharist thus celebrated that the community of the faithful, especially the family of the deceased, learn to live in communion with the one who “has fallen asleep in the Lord,” by communicating in the Body of Christ of which he is a living member and, then, by praying for him and with him. (1371, 958)
1690    A farewell to the deceased is his final “commendation to God” by the Church. It is “the last farewell by which the Christian community greets one of its members before his body is brought to its tomb.”192 The Byzantine tradition expresses this by the kiss of farewell to the deceased: (2300)
By this final greeting “we sing for his departure from this life and separation from us, but also because there is a communion and a reunion. For even dead, we are not at all separated from one another, because we all run the same course and we will find one another again in the same place. We shall never be separated, for we live for Christ, and now we are united with Christ as we go toward him... we shall all be together in Christ.”193