The persecution of Catholics and of the Catholic Church are growing day by day.

Though the Church is no stranger to persecution, its still difficult (at least for me) to witness the insanity of the secular world attacking the Catholic Church and Her clergy for reading the Bible!

Over in Switzerland, Bishop Huonder has once again (he must be used to this by now) become the focus of an attack by gay Nazi's the "Pink Cross" for reading Sacred Scripture and denouncing gay 'marriage'.

The good Bishop has in the past been called assorted names for not wanting 4 year old's in public school to be subjected to sex education so graphic its offensive to most adults!

Last Friday, the Bishop of Chur gave a talk based on Catholic teaching and Sacred Scripture against same sex 'marriages' and the gay Nazi's Pink Cross brigade showed its tolerance for others who believe differently than they do by demanding an apology and seeking criminal charges for a 'hate crime' against the Catholic Bishop for reading the Bible.

The 73 year old Bishop Huonder dared to read a few passages in Sacred Scripture from Leviticus stating that same sex sexual relations are an abomination to God and hence these scripture back up Catholic teaching.
At no time did the Bishop say the Catholic Church was calling for the death penalty for homosexuals under the old covenant Jewish law- but you wouldn't know that from the insanity coming out of the hateful intolerant gay Pink Cross organization in Switzerland. The focus of the Bishop's talk was FAMILY and what constitutes a marriage (1 man + 1 woman) not the death penalty required under Jewish Old Testament Law.

For daring to read two verses of Leviticus from the Bible, the gay Nazi's Pink Cross brigade want the Bishop arrested under  "hate crimes" because "representatives of the church do not live in a legal vacuum". 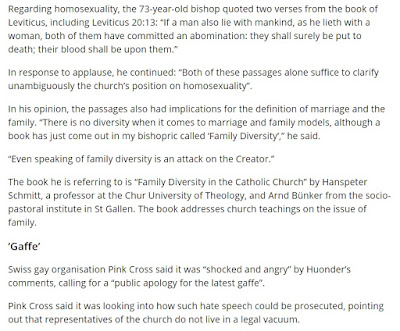 Since when is a member of clergy (be it Catholic or Protestant) not allowed to read the Bible in a church or anywhere else?  Has society learned nothing from history?  Are we always doomed to repeat the worst of history while tossing out the best?

But that is the intent isn't it?

To silence Christianity, keeping people in the dark so that evil prevails.

What is this world coming to when clergy can no longer read the Bible for fear of arrest?

We are in a time of martyr making.

Pray for Bishop Huonder and pray for the ignorant people belonging to the 'Pink Cross' that they might gain wisdom before their own doom.