Undercover videos (see links below) released by the Center for Medical Progress reveal that Planned Parenthood abortion clinics, with the sanction of the Planned Parenthood Federation of America, are involved in the harvesting of body parts of unborn children aborted in their facilities and profiting from their sale contrary to federal laws prohibiting such practices. The videos show high-level Planned Parenthood executives haggling over the prices of fetal specimens. The videos also raise ethical questions about the exploitation of unborn children for financial gain and risks to women’s health if abortion procedures are altered solely to procure more profitable specimens.

As a consequence of this public scandal, several states have initiated investigations of Planned Parenthood and legislation has been introduced in Congress to defund the abortion giant. Planned Parenthood currently receives over $500 million in taxpayer funding annually.

The ProtestPP.com coalition is headed by Citizens for a Pro-Life Society, Created Equal, 40 Days for Life and the Pro-Life Action League, and is co-sponsored by fifty state and national pro-life organizations.

“All politics is local. We cannot only look to Washington, DC and our state governments to solve this problem. Planned Parenthood is located in large and small communities all across America. Each community with a Planned Parenthood abortion clinic or satellite office needs to take action against the killing of babies and the trafficking of their body parts. Concerned local citizens from New Haven will be sending the message that it’s well past time for Planned Parenthood to be closed in New Haven!” 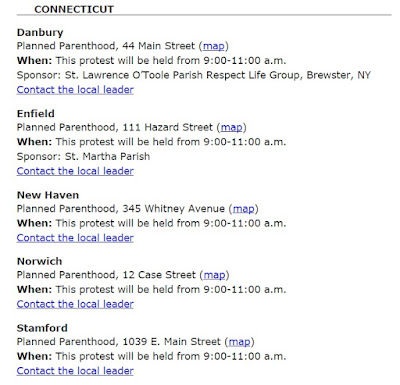