How do you stop a pope who has gone off the rails?


"If the faith is in imminent peril, prelates ought to be accused by their subjects, even in public." -St. Thomas Aquinas 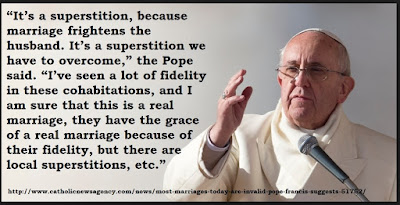 How do we stop a pope who has clearly (for a while now) gone off the rails?

No, seriously.  What do we do?  Sit by and watch as Pope Francis continues the downward spiral of spouting heretical ideology that is causing chaos and mass confusion in the world?

We do nothing?  Just stand by and watch people go to hell with a helping hand from the Vicar of Christ?

How long do we keep saying "He hasn't officially changed Church teaching" to comfort ourselves when we've got a pope saying things like fornicators have "real marriages" because of their "fidelity to each other"?


Quote: He [Pope Francis] said that in Argentina’s northeast countryside, couples have a child and live together. They have a civil wedding when the child goes to school, and when they become grandparents they “get married religiously.”
“It’s a superstition, because marriage frightens the husband. It’s a superstition we have to overcome,” the Pope said. “I’ve seen a lot of fidelity in these cohabitations, and I am sure that this is a real marriage, they have the grace of a real marriage because of their fidelity, but there are local superstitions, etc.”


When did fidelity fornication become sinless?  Is this not a "new teaching" by a Catholic pope?  How many people living in the mortal sin of cohabitation will now not even consider an actual valid marriage because Pope Francis has just made this latest SCANDALOUS statement?

So go ahead and fornicate folks, if you are loyal to each other Pope Francis "is sure" you have a "real marriage" even though you've never gotten married.  Pope Francis has just redefined the word "fornicator".

Can the rest of the Catholic world now call Pope Francis' ideology heresy?

What else will it take before we collectively call a spade a spade?

When our first pope, Saint Peter was wrong about his treatment of the Gentile converts nearly everyone was silent.  It seemed no one was willing to step up and tell the pope he was wrong- then Saint Paul stood up and opened his mouth and corrected Saint Peter.  Peter accepted the correction and world didn't end.  Should it be any different today?

I don't have to list all the things this pope has said and done over the last few years - you all know what I am talking about.

Is there no one at the Vatican willing to correct Pope Francis?  No one? No backbones to be found among the clergy?  What a disgrace!

Is it to fall to the laity here and there around the world, whom the pope probably doesn't hear and wouldn't listen to anyway, to speak up?

I know everyone sees it - including clergy, too many simply will not tell the truth about what we all see happening.

Shame on you for your silence, souls are being lost and you sit by and do nothing to stop it!

In Christ and weeping,

2353 Fornication is carnal union between an unmarried man and an unmarried woman. It is gravely contrary to the dignity of persons and of human sexuality which is naturally ordered to the good of spouses and the generation and education of children. Moreover, it is a grave scandal when there is corruption of the young.