Gretchen Carlson is a sandwich short of a picnic 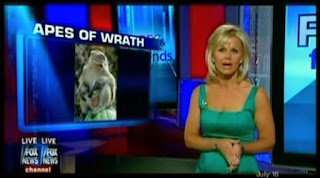 Gotta say something about Fox News firing Gretchen Carlson and her suing the network over a variety of complaints targeting the network and specifically her former co-host Steve Doocy.

Quote from Politico: The complaint was filed in the Superior Court of New Jersey and claims Ailes made “sexually-charged comments” to Carlson, "ranging from lewd innuendo, ogling and remarks about Ms. Carlson’s body to demands for sex as a way for her to improve her job standing."
“[D]uring a meeting last September in which Ms. Carlson complained about ongoing discriminatory and retaliatory treatment, Mr. Ailes stated, "I think you and I should have had a sexual relationship a long time ago and then you’d be good and better and I’d be good and better," adding that "sometimes problems are easier to solve' that way,” according to Carlson’s lawyers.
On other occasions, the complaint alleges Ailes asked Carlson to "turn around so he could view her posterior, commented repeatedly about her legs, and instructed her to wear certain outfits that he claimed enhanced her figure.” Ailes also allegedly “directed sexist comments” about Carlson in public and announced to others at a industry event that “he had slept with three former Miss Americas, but not with her.”
The complaint goes on to allege that Carlson was fired from “Fox & Friends” in 2013 because she complained about co-host Steve Doocy’s actions. Ailes, the complaint alleges, mocked Carlson and told her to stop being offended “so God damned easy.” Though she was moved to host her own show in the afternoon hour, the complaint alleges that the move was a demotion and that Ailes “reduced her compensation and withheld network support and promotion for her show.”

Before I get to all that, I need to share my own views of Fox News.  I was a Fox News watcher from their very first day on the air- this was before I had a computer in the 1990's when I would hand write and "snail-mail" comments to the show! I loved this news network.

When 'Fox & Friends' first came on the scene I was hooked.  That was when it was an actual morning news show, as to what it is now- a variety show with bits of news clips scattered between the grilling on the sidewalk segments, the concerts and the 'Fox & Friends' home shopping network of products to buy and which ones to avoid. (I weep at what has been lost at this network). So my comments are in light of the Fox & Friends show, not about the alleged Mr. Ailes complaints.

The lowest point of 'Fox & Friends' in my opinion came the day Gretchen Carlson joined the cast after E.D. Hill left. I personally, did not like this woman from day one and saw clearly she could not fill the void left by Hill.  The chemistry that Doocy, Kilmeade and Hill had was not found with the introduction of Carlson.

And I hate to say it, but Carlson just came across as dumb on television. Where Hill looked professional and intelligent, Carlson just looked...well, dumb and out of place.

Carlson's "Jihad Monkey" breaking news story will go down in my mind as her finest moment proving my point.  ;)

I still cringe remembering that one! Seriously, HOW could she do that segment and seem to actually believe what she was saying? Where was her journalistic integrity when she reported on Jihad monkey's being trained by the Taliban?

How could ANYONE take her seriously or even bother to tune in any more? I couldn't. I gave up on a show I had enjoyed since its creation all thanks to Gretchen Carlson.

When I further read from Politico, Carlson's complaint about former co-host Steve Doocy had supposedly "mocked" her - well...[flashback to Jihad monkey report]

quote: "Doocy engaged in a pattern and practice of severe and pervasive sexual harassment of Carlson, including, but no limited to, mocking her during commercial breaks, shunning her off air, refusing to engage with her on air, belittling her contributions to the show, and generally attempting to put her in her place by refusing to accept and treat her as an intelligent and insightful journalist rather than a blond (sic) female prop," the complaint alleges." [end quote]

My impression of Steve Doocy is he is a fine upstanding guy.  He speaks well of others, often shares with viewers his Catholic faith in comments during the show (especially during holidays or Catholic news stories) and appears to have a happy decent family.  I don't know Doocy, but I like what I see.

I can't imagine him guilty of "severe and pervasive sexual harassment of Carlson" or mocking her during commercial breaks.  The "shunning her off air", perhaps if she's as dumb in real life as she seems on television, who could blame Doocy for not wanting to further subject himself to her outside of work?

I gotta ask, how is "shunning" a person sexual harassment? Refusing to engage with her on air is sexual harassment?  If Doocy was sexually harassing Carlson, why is she complaining he shunned her and refused to engage with her? Again, she's complaining he didn't spend more time with her and at the same time saying he sexually harassed her?  By ignoring her? Huh?

I think she's a sandwich short of a picnic.

All that said, I am THRILLED Fox News canned retched Gretchen Carlson!

Things are finally looking up at Fox News!