Don't tell me the pope is powerless! 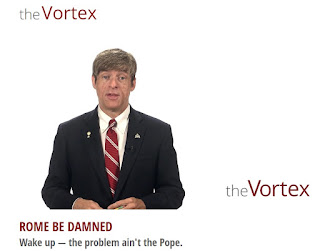 As is my custom, I watched today's episode of Church Militant's 'The Vortex' and found myself talking back to Michael on my computer screen (I do that with the television too) and really getting sort of ticked off with him.

He was dashing my hopes and dreams of a pope who has any influence at all in righting this ship. What *I* got out of today's Vortex (and I do hope others found something more encouraging) is "it ain't in the pope's power to fix the Church so don't bother hoping in this pope-or any pope in the future because the power is all with the Bishops. The pope has zero authority, influence or ability to fix the problems in our Church."

How freaking depressing! I gotta say, I felt the hope get sucked right out of me listening to today's Vortex. I'm sure that isn't what Mr. Voris intended but there it is.

The Vortex began with Mr. Voris once more scolding Catholic bloggers (and EWTN) who say anything negative about the pope's statements that too often cause chaos and confusion among the laity.

quote: "The problem any pope faces, has faced or will face for the foreseeable future is that no matter what he does or doesn't do, the spirit of disobedience and rebellion rampant in the ecclesiastical ranks isn't going anywhere. The danger of always pointing to Rome, always saying the Pope is a heretic, the Pope is confusing, the Pope is this, the Pope is that, is that the Pope isn't the problem — just an easy target.
When outfits like EWTN start talking about confusing things the Pope is saying, the question needs to be asked: Where have you been all these years when hundreds of bishops have let the Church deteriorate and rot on the vine? Is that just a case of chest pounding to act all tough now because they have tested the winds and realize that their audience doesn't like some of what the Pope says?"

Seemingly, Mr. Voris wants to put all the blame on the Bishops and tell us that no matter how much a pope tries, he simply can not control these bad Bishops and the Church will forever be corrupted because no pope can get the Bishops under control.

I simply REFUSE to believe that.  And I am NOT placing the blame alone on our current pope. Any pope who won't TRY or attempt to stand up against evil or corruption in the Church SHOULD be called out and put on the spot. The Pope is our shepherd, we are the flock. 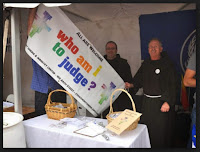 Right now the flock are walking around with little to no direction because THIS pope is rambling on about climate change and turning off air conditioning, while Bishops fight for immigration reform with nations, priests attend gay pride parades selling "who am I to judge" t-shirts and nuns work for birth control and abortion. What the hell is that all about?

Don't tell me the pope has NO authority to do anything!  Sorry Michael, I do not buy that. I won't believe that. To allow myself to believe that would be to fall into despair and hopelessness.

The fact is we need a STRICT BY THE BOOK pope who ENFORCES the Faith. If a Cardinal/Bishop shows any sort of wavering in the faith or rebellion he is removed from his position for a time(give 'em a chance to repent), and sent to uncomfortable accommodations (somewhere hot with no AC -that the pope is so concerned about- no more plush accommodations) and given ONE shot to make it right, if he refuses he is EXCOMMUNICATED PUBLICLY for the scandal he may have caused.  Do that to a few dozen Bishops and see what happens!

There is NO reason for THIS pope to continually remove good authentic Cardinals/Bishops from prominent positions in the Church and replace them with Cardinals/Bishops who hold heretical progressive beliefs (and Michael knows who they are he talks about them all the time on his shows) other than those are the types of men the current pope wants in leadership positions.

Michael paints a picture of popes waving the white flag to corrupt Bishops and saying "Oh well, they win, I lose, game over!" What sort of mentality is that for a Catholic to hold?

Voris goes on to say:

quote:  "What if the Pope came out tomorrow and said no more Holy Communion in the hand, no more altar girls, no more heretics speaking at the L.A. Archdiocese Religious Education Conference, no more cardinals leading parades with gays, no more horrible catechesis being taught in schools (provided he would even know any of this) — what if he came out and did all this? Do you really think your local bishop in your local diocese, or the national conferences of Catholic bishops in all sorts of countries, would give it the slightest attention?"

Imagine that!  A pope being pope!

What if only a quarter of the worlds Cardinals/Bishops did as the Pope said? Would that not be an improvement?  A turn in the right direction? Why can't the pope-any pope(current or future) say these things?

And let's dream bigger! What if HALF the Bishops in the world insisted on Holy Communion on the tongue, no more altar girls, no more heretics speaking at any institute with the name "Catholic" in it? What if?

Is it too much to dream of half the Bishops in the world listening to the pope if he said those things?  Let's take it back to the early Church.

If it's too hard to think that we can't find half, then how about a dozen faithful Cardinals and Bishops in the Church who would listen to the pope and do as he says? Would not even the number of the Apostles have an effect on the Church?  But of course it would! Look what the Apostles were able to do!

I truly don't understand Mr. Voris today. What he seemed to be saying is we can't even have the hope of "what if" because all hope is lost if you place it in a pope to fix things, because no one will listen to the pope. That is the message I received from watching The Vortex today and I am pretty sure that wasn't the message Mr. Voris was trying to send.

Any pope doing the Will of God can do anything...even if he only has Twelve faithful men listening to him. I truly believe that and I hold hope in that.

Voris has declined to say anything publicly about this pope, but I know he and his staff aren't blind to the shuffling of authentic Cardinals and Bishops with liberal progressive Cardinals and Bishops so that the heretical Cardinals/Bishops are in positions of power. They've reported these changes at Church Militant. And they know it happened and is happening under the authority of this pope.

He has the authority to decide the focus of his papacy...saving souls...saving the planet...converting sinners or leaving them where they are.

The pope is responsible for the direction the Church is taking right now, under this papacy based on his decisions.  The direction we have seen thus far is progressive- that is why the world adores him so much.  The overwhelming message the world has heard from Pope Francis is mainly global warming and 'who am I to judge'. 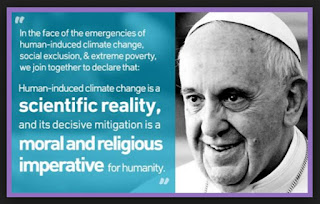 He has chosen a more progressive and liberal leaning Church, and to accomplish that he has demoted more orthodox conservative Cardinals/Bishops and replaced them with progressives.

That is how this pope has chosen to lead the Church and laity along with the Bishops, who are following his lead as they work diligently to fight global warming and reform immigration laws around the world. They are following our popes lead, so clearly the Bishops ARE listening to Pope Francis.

The problem is not that Pope Francis is our pope. The problem is we have a pope who is leading us in a war against global warming and immigration reform while telling the world he does not wish to convert people to the Catholic faith. 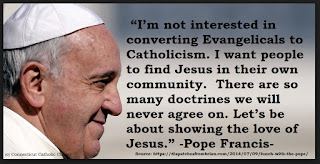 The Bishops are hearing that message loud and clear and like good little soldiers following the lead set before them by Pope Francis.

We can't ignore the facts.

Michael asks, 'what if'?

Yes, Michael, what if  the message were different? How many would follow? Half?  A quarter? Only a dozen faithful men?

Oh what God can do with Twelve!

UPDATE: One wonders if Raymond Arroyo got wind of Church Militant's Vortex mentioned above... 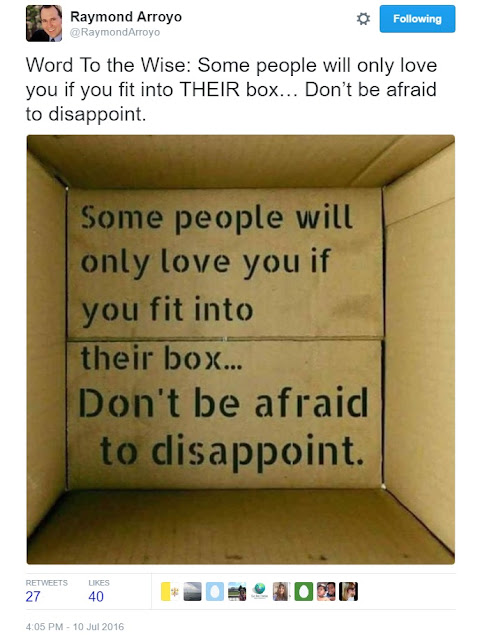