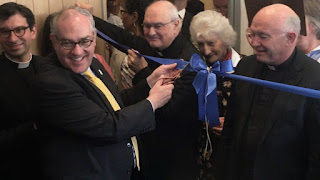 
Irondale, AL (EWTN) – EWTN Global Catholic Network has opened its first studio and office in the United Kingdom. The facility is located in a converted home in the historic Village of Walsingham, north of London. The town is the home of one of the most important pilgrimage sites in Europe, the Shrine of Our Lady of Walsingham, which dates to 1061. The formal dedication took place on Tuesday, August 29 in a ceremony attended by EWTN Chairman of the Board and Chief Executive Officer Michael P. Warsaw; Monsignor John Armitage, Rector of the Shrine; and the Most Reverend Alan Hopes, Bishop of East Anglia.

“This is a particularly important step for the continued development of EWTN in the U.K.,” said Network Chairman and CEO Michael P. Warsaw. “This new facility will allow us to greatly expand our capacity to produce programming for our European channels as well as to more easily incorporate content from the U.K. into our other channels around the world. 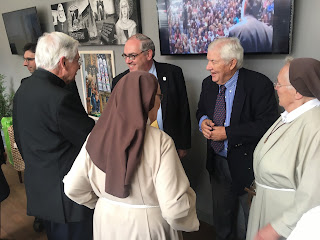 “It is also appropriate that this new facility is located just steps from the Shrine of Our Lady of Walsingham, which for centuries has been one of the most important centers of Catholicism in Britain. Every year hundreds of thousands of people come to Walsingham on pilgrimage,” said Warsaw. “I'm very happy that EWTN now has a presence in this extraordinary place and can share what happens here with our audience around the globe.”

In addition to producing programs with leading Catholics from across the U.K., Warsaw said EWTN hopes to form a strategic collaboration with the Shrine of Our Lady of Walsingham that will help the Shrine carry out its mission to evangelize.

In a letter of congratulations read at the dedication, Cardinal Vincent Nichols, Archbishop of Westminster and President of the Bishops Conference of England and Wales, wrote: “Over the last 950 years Walsingham has been a place of pilgrimage, proclaiming the joy of the Annunciation; in this new chapter of its history, I welcome the opportunity for the Shrine and EWTN to work together as servants of the New Evangelization.”

Shrine Rector Monsignor John Armitage noted that “Walsingham is very much the crossroads of the Catholic Church in England. The Church needs to be at the crossroads, particularly an organization in communications. So we are delighted as a Shrine to be able to welcome EWTN to come here as an organization in their own right, but at this place where so many pilgrims come from all over the world.”

EWTN transmits dedicated television and radio channels for the U.K. and Ireland. Those services are available on the Sky satellite platform, cable and video streaming platforms throughout the region. The Network also transmits two additional television channels for the European continent.

The project in Walsingham was made possible through the work of Saint Clare Media-EWTN, Ltd., the Network's not-for-profit affiliate in Britain. That entity conducts marketing, fundraising, and program production for the EWTN U.K. television and radio services, as well as the creation and distribution of news content in collaboration with EWTN's global news outlets.