This is a Catholic celebration in honor of Saint Kateri's feast day. 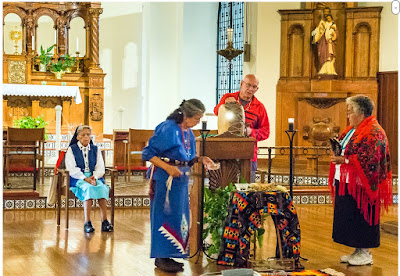 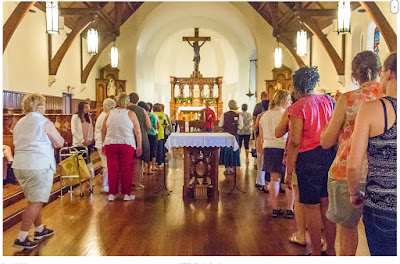 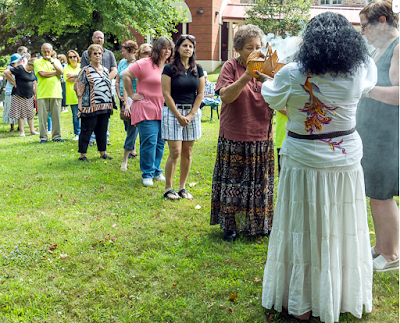 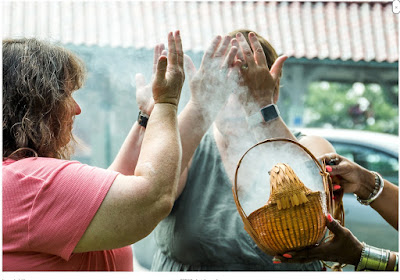 Quote: "Guests and the Sisters of the Blessed Sacrament gathered July 15 at the National Shrine of St. Katharine Drexel in Bensalem to celebrate the feast of St. Kateri Tekakwitha and Native American cultures.
The event on the shrine grounds was attended by members of the Southeastern Cherokee Confederacy and the St. Kateri Circle led by Chief Buffy Red Feather Brown. The day included prayers, hymns, craft-making and a presentation on St. Kateri’s life."

Not to worry, its all Bishop approved.

INCULTURATION,WORSHIP, AND SACRAMENTS
Liturgy and inculturation are major topics of conversation
at all levels in ministry to Native American
Catholics. No attempt was made in this survey to
assess the degree of inculturation that is envisaged
or attempted, but the survey asked, “Do the Native
people in your arch/diocese use their religious symbols
and rituals in their communal prayer life?”
Fifty-one dioceses (just under 30 percent of the
total) replied “Yes” to this question and described
the symbols and how they are used. A number of
dioceses stressed that these symbols and rituals are
used only on special occasions; others indicated that
they are incorporated into the ongoing worship of
the community. Among the most common symbols/rituals
are the following:
• Smudging (blessing, purifying) with cedar, sage,
sweetgrass, and tobacco
• Eagle feather used in blessings
• Dance and drums used for liturgies
• Indian music in liturgy (one diocese noted that
Br. Martin Fenerty, FSC, has composed five
Masses based on Native American melodies)
• Indian naming ceremony in conjunction
with Baptism
• Native attire used in local and diocesan
celebrations
• Four-directional prayer
• Sweat lodge
• Statues, relics of Blessed Kateri Tekakwitha
• Medicine wheel
• Native crucifix and cross
• Sacred vessels, decorations, and vestments
with Native designs
• Sacred pipe
The incorporation of Native symbols and rituals in
communal worship is much more common in
parishes/ministries serving Native Americans on
reservations or in rural communities than in urban
settings. Some of those ministering to Native
Americans noted that the diversity of tribes, and thus
symbols, in urban areas makes it difficult to find symbols
relevant to all the groups to whom they minister.[clipped]

Even Archbishop Chaput has prayed in sweat lodges and gone on vision quests. 😕

I don't get it and I'm part Native American, so is my ex-husband so my kids get it from both sides of the family. I've been to Pow-wow's, many of them over the years (prior to becoming Catholic) and Native American celebrations. It is part of my family's heritage, that doesn't change the fact that scared pipes, medicine wheels, smudging, sweat lodges (used to talk to entities) etc., are all part of Native American paganism.

How can you be Catholic while still clinging to pagan "scared" objects and practices like the medicine wheel?


Quote: "We believe that the Medicine Wheel creates a vortex of healing energy that comes out of the ground and spirals out into the surrounding area, thus benefiting all living things. It is mirrored by another Wheel in the Spirit World.  Heaven and Earth are joined together by a tube of energy that flows between the two Wheels and to stand in The Wheel is to be part of that joining. The more we do ceremony in the Wheel, the stronger its energy and connection become. It is a beacon of Light shining out to illuminate the darkness and radiate healing and understanding into our community and to all the Earth." 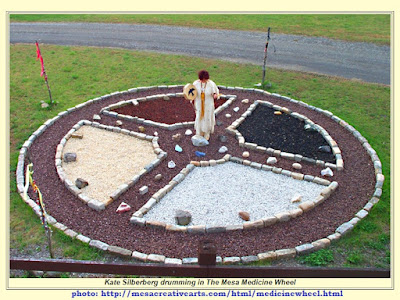 How about that sacred pipe?


Quote: "The pipe ceremony is a sacred ritual for connecting physical and spiritual worlds. "The pipe is a link between the earth and the sky," explains White Deer of Autumn. "Nothing is more sacred. The pipe is our prayers in physical form. Smoke becomes our words; it goes out, touches everything, and becomes a part of all there is. The fire in the pipe is the same fire in the sun, which is the source of life." The reason why tobacco is used to connect the worlds is that the plant's roots go deep into the earth, and its smoke rises high into the heavens."

Does any of that sound compatible with Catholicism to you?

Quit straddling the fence. Either you're Catholic or you're not. Give up the pagan sacred items and embrace Catholicism.