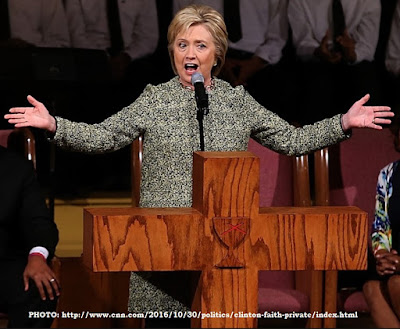 When Hillary declared "deep-seated cultural codes, religious beliefs and structural biases have to be changed." I had no idea she'd decide to become a preacher and start her own religion!

Quote: "After losing to President Donald Trump in the 2016 presidential election, Hillary Clinton has reportedly indicated what she would like her next endeavor to be.
At a recent photo shoot for his new book, the former secretary of state reportedly told her pastor, Bill Shillady, that she wants to follow in his footsteps and become a pastor, as she now believes that it is time to speak out about her faith, according to The Atlantic."

Just what the world needs the morally bankrupt Hillary spreading her delusional faith beliefs to the masses in some mega church somewhere.